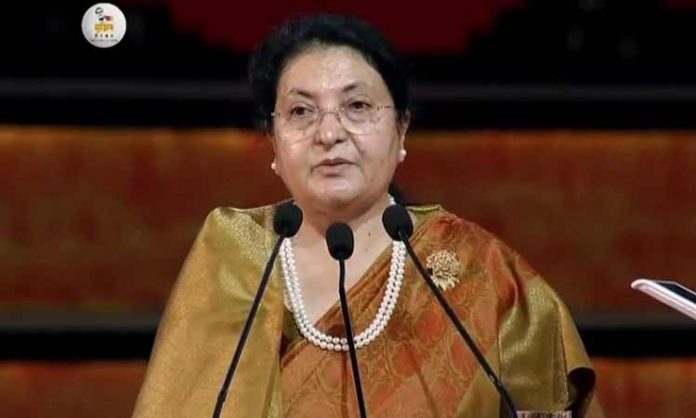 A Nepal Airlines flight carrying the president reached Shahjalal International Airport at 10 am on Monday. Bhandari was greeted by President Abdul Hamid upon arrival.

The occasion marks the first time a Nepalese president has visited Bangladesh. Bhandari is accompanied by several high-ranking officials, including Nepal’s foreign minister and the secretary of the Ministry of Foreign Affairs, on the trip.

She will pay respects to the Liberation War martyrs at the National Martyrs’ Memorial in Savar on the first day of her visit.

Afterwards, Bhandari will meet Prime Minister Sheikh Hasina and will join a programme at the National Parade Ground as a special guest in the afternoon. Bangladesh President Abdul Hamid and Hasina will attend the programme as well.

In the evening, the Nepalese president will hold a meeting with Hamid at the Bangabhaban where several memoranda of understanding will be signed.

A cultural programme will be held later in the night at Bangabhaban’s Darbar Hall which will be followed by dinner.

On Tuesday morning, she will visit Bangabandhu Memorial Museum at Dhanmondi Road No. 32 and pay tribute to the Father of the Nation.

Bhandari will join a programme at the Embassy of Nepal in Dhaka in the afternoon before departing Dhaka at around 3:30 pm.

President Hamid travelled to Nepal on Bhandari’s invite in 2019.