At least 20 injured as police, BNP supporters clash in Chattogram 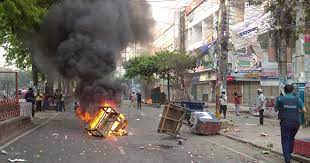 At least 20 people have been injured in clashes with the police during the BNP’s demonstration in Chattogram.

The police detained Monwara Begum Moni, president of Chattogram Mohila Dal and former ward councillor, and at least 14 others after the clashes outside the BNP’s office at Nasimon Bhaban on Monday afternoon.

The loyalists gathered outside their office to join the demonstration as part of programmes announced centrally.

The BNP activists vandalised stuff kept on the sides of the road and torched a motorcycle.

They also vandalised some other motorcycles. Some of them were carrying sharp objects.

A pitched battle began after additional police forces joined in. The police said they fired several rounds of warning shots to bring the situation under control.

Nezam Uddin, OC of Kotwali Police Station, said the BNP workers occupied a street blocking traffic although they did not have permission to demonstrate on the street.

They attacked the police after the law enforcers asked them to leave the street and demonstrate on the ground outside their office, he said.

The law enforcers detained at least 15 leaders and activists of the BNP and its affiliates during the operation. Moni was arrested in a building next to the BNP office.

The “attack” aimed at creating anarchy, he said, adding that at least six law enforcers, including policewomen, were injured in the incident.

Abul Hashem Bakkar, member secretary of the BNP’s port city unit, blamed the police for the incident, alleging that the law enforcers attacked them first.

Some 20 BNP activists were injured after the police “attacked” the supporters of the unit’s President Shahadat Hossain when they were entering the office, Hashem said.

They arrested a number of activists, he added.