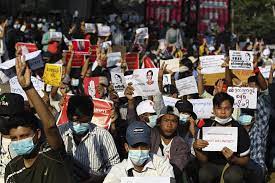 Myanmar security forces have opened fire on protesters in the main city of Yangon, leaving a man dead, as thousands swarmed the streets across the country after the bloodiest day since the military coup two months ago.

Several people were also injured when the security forces opened fire at protesters in a Yangon neighborhood on Monday, according to the Democratic Voice of Burma.

Similar protests also took place in numerous other towns, including the central towns of Bago, Minhla and Khin-U, the southern town of Mawlamyine, and Demoso in the east.

The demonstrations come after security forces on Sunday fired live rounds at mourners at a service held in the town of Bago near Yangon for Thae Maung Maung, a 20-year-old student who was shot dead during Saturday’s protests.

Over 100 people, including children, were killed on Saturday, the bloodiest day of protests since the military seized power on February 1, drawing international outrage.

“While we are singing the revolution song for him, security forces just arrived and shot at us,” a woman identifying herself as Aye told Reuters on Sunday, adding, “People, including us, run away as they opened fire.”

The Assistance Association for Political Prisoners advocacy group reported that the crackdown has left 460 civilians dead since the coup.

The military said on February 1 that it had arrested Myanmar’s ousted de facto leader Aung San Suu Kyi and her associates over accusations of voter fraud in favor of her National League for Democracy (NLD) Party in the November 2020 elections.

The military placed Commander-in-Chief Min Aung Hlaing in power and pledged to hold fresh elections in a year and hand over power to the winner, but has not set a date