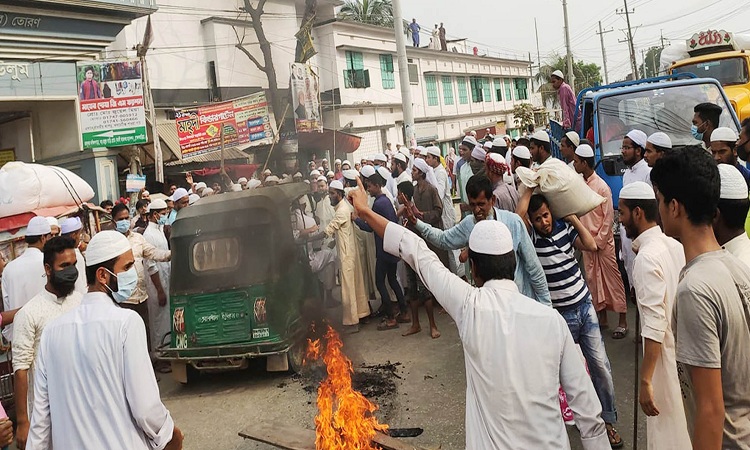 The police have started a case against 500-600 unidentified individuals with ties to clashes between anti-Modi protesters and law-enforcement personnel in Dhaka’s Baitul Mukarram area on Mar 26.

SI Shamim Hossain of Paltan police station filed the case on Friday night. The political identities of the accused were not mentioned, said Inspector Md Sentu Mia of the same police station.

A fight broke out between two groups of worshippers at the end of a prayer session on Friday, according to the case dossier. At one point, the groups exited the mosque and the clash turned violent. The police later fired shots and tear gas to bring the situation under control.

Witnesses said local Chhatra League and Awami League activists clashed with a group of worshippers after they came out of the mosque following the conclusion of Jummah prayers on Friday and started delivering anti-Modi slogans.

Police subsequently used tear gas, rubber bullets and water cannons to quell the clashes. At the time, anti-Modi protesters set fire to two motorcycles near the north gate of the mosque and hurled stones at the police.

Hifazat-e Islam on Monday pulverised several districts of Bangladesh with a fresh wave of violence as supporters of the radical group clashed with security agencies and pro-government activists during a nationwide shutdown which was called over deaths during protests against Indian Prime Minister Narendra Modi’s visit.

Modi arrived in Dhaka on Friday on a two-day visit to mark Bangladesh’s golden jubilee of independence and the birth centenary of Bangabandhu Sheikh Mujibur Rahman. He also visited temples in Satkhira and Gopalganj, and Bangabandhu’s mausoleum in Tungipara.

Hifazat and some other groups objected to inviting him to the celebrations because of his government’s policy towards the minority Muslims in India.

The home ministry in a notice on Sunday evening vowed to go tough if “religious fanaticism and violence” centring Hifazat’s protests did not stop.