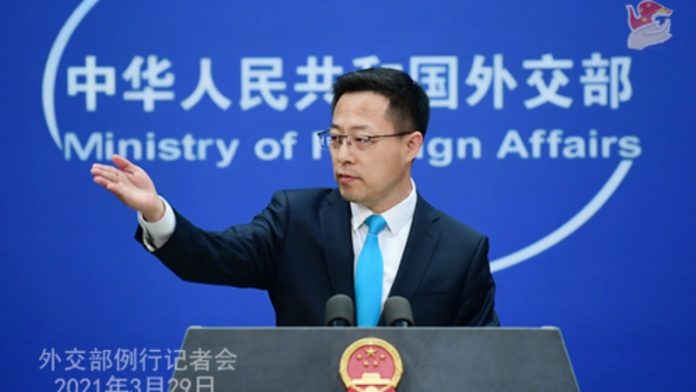 A spokesman for China’s Foreign Ministry says the recent strategic cooperation agreement signed between Iran and China is not against any third party and only means to further cement collaboration between Tehran and Beijing.

“The plan focuses on tapping the potentials in economic and cultural cooperation and charting course for long-term cooperation. It neither includes any quantitative, specific contracts and goals nor targets any third party,” Zhao Lijian said in a Monday press briefing.

He added that the deal “will provide a general framework for China-Iran cooperation going forward.”

The Chinese spokesman noted that Tehran and Beijing issued a joint statement in January 2016 on the importance to establish comprehensive strategic partnership between the two sides and agreed to sign a plan in this regard.

The sides have recently reached an agreement on the content of the comprehensive plan after holding communication and consultations, the Chinese spokesperson said.

In a meeting with the Chinese foreign minister, Zarif said the 25-year comprehensive strategic partnership agreement would lead to further strengthening of relations between the two countries.

Wang also told Zarif that “relations between the two countries have now reached the level of strategic partnership and China seeks to comprehensively improve relations with Iran.”

He added that the signing of the comprehensive document shows Beijing’s determination to promote ties with Tehran to the highest possible level.

US President Joe Biden, whose country has imposed sanctions on both Iran and China, has expressed concern over the deal.

“I’ve been concerned about that for a year,” a Sunday video circulating on social media shows Biden saying in response to a question about the emerging partnership between China and Iran.

Iran’s top security official on Monday reacted to Biden’s expression of concern over the Iran-China Comprehensive Strategic Partnership agreement, saying the US president’s concern about the deal is justified because it will accelerate the decline of US power in the world.

“Biden’s concern is correct: the flourishing of strategic cooperation in the East is accelerating the US decline,” Secretary of Iran’s Supreme National Security Council (SNSC) Ali Shamkhani wrote in a tweet.

Iran and the US are at loggerheads over the fate of the 2015 nuclear agreement Tehran struck with six world powers, from which the US withdrew in May 2018 and slapped harsh economic sanctions on the Islamic Republic under a so-called maximum pressure policy.

Biden has expressed willingness to rejoin the nuclear deal, officially known as the Joint Comprehensive Plan of Action (JCPOA), and repeal his predecessor’s maximum pressure policy, but he has failed so far to honor either of his promises.