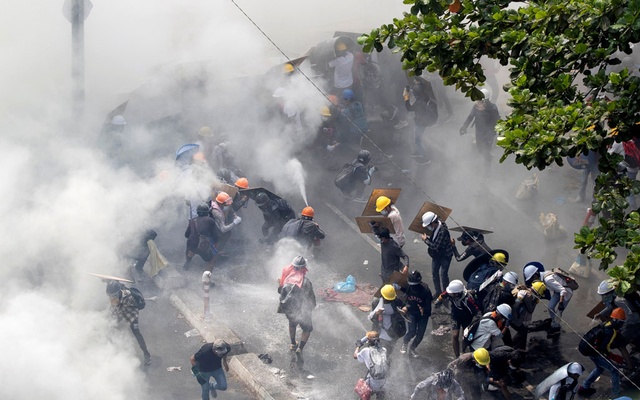 One of Myanmar’s main ethnic minority rebel groups warned of a growing threat of major conflict on Tuesday and called for international intervention against a military crackdown on opponents of last month’s coup.

Myanmar has been in turmoil since the army ousted an elected government led by Nobel laureate Aung San Suu Kyi on Feb 1, detaining her and reimposing military rule after a decade of tentative steps towards democracy.

While cities and towns across the country have been consumed by protests against the military, fighting has also flared between the army and insurgents in frontier regions and refugees are spilling over borders.

The Karen National Union rebel group, which operates in the east along the border with Thailand, said it was bracing for a major government offensive.

“Now, thousands of Burma military ground troops are advancing into our territories from all fronts,” the group said in a statement.

“We have no other options left but to confront these serious threats posed by the illegitimate military junta’s army in order to defend our territory.”

The group urged the international community, Thailand in particular, to help Karen people fleeing the “onslaught” and for countries to cut ties with the junta to stop the violence against civilians.

A spokesman for the Myanmar junta did not answer calls seeking comment.

Opponents of the coup have called for a united front with insurgent groups to help those standing up to the military.

Rebels have battled the government for decades for greater autonomy in remote border regions. The military has justified its long grip on power by saying it is the only institution capable of ensuring national unity.

Thailand denied accusations from activists that refugees were being forced back but a Thai official on the border said the army was sending most people back because it was deemed safe on the Myanmar side.

A spokesman for the UN refugee agency said it was concerned about reports people were being sent back and it was seeking information from Thailand.

A border state in India withdrew an order to refuse refugees food and shelter after the measure drew fierce public criticism.

The military seized power saying that November elections won by Suu Kyi’s party were fraudulent, an assertion dismissed by the election commission.

At least 512 civilians had been killed in nearly two months of protests against the coup, 141 of them on Saturday, the bloodiest day of the unrest, according to the Assistance Association for Political Prisoners (AAPP) advocacy group.

Despite the surge in violence, thousands of protesters came out to march in several towns on Tuesday, according to media and photos on social media.

Security forces shot and killed one man in the southernmost town of Kawthaung, the Mizzima news portal reported, and one person was killed in Myitkyina in the north, a relative of the 23-year-old victim told Reuters.

A civil disobedience campaign of strikes has paralysed parts of the economy and protesters stepped it up by asking residents to leave rubbish at intersections in the main city of Yangon.

Western countries have condemned the coup and the violence and called for Suu Kyi’s release, and some have imposed limited sanctions.

Asian neighbours have been more guarded though Indonesia, Malaysia and Singapore have spoken out, and Indonesia did so again on Tuesday, while renewing an offer to help.

“Indonesia strongly denounces this kind of act. It is unacceptable,” its foreign minister, Retno Marsudi, said while on a visit to Japan, referring to the surge in violence.

Indonesia has led efforts by members of the 10-country Association of Southeast Asian Nations (ASEAN), of which Myanmar is a member, to encourage a negotiated solution, despite an old agreement not to comment on each other’s problems.

“While continuously respecting the non-interference principle, since the very beginning ASEAN offers is assistance to Myanmar,” Retno said.

She said the safety and well-being of the Myanmar people was paramount, adding: “Dialogue should be pursued to bring democracy, peace and stability back in Myanmar.”

The Philippines issued its strongest comment on the crisis, saying it was dismayed by the “excessive and needless” force against protesters.

“We reiterate our call for security forces in Myanmar to exercise restraint and desist from resorting to disproportionate force against unarmed citizens,” the Philippine foreign ministry said.

Thailand asked for the violence to be “reduced”. It said Myanmar had acknowledged the message but had said it would depend on the situation.

Traditionally, foreign criticism and Western sanctions have failed to sway the generals.