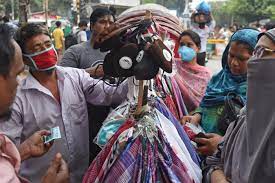 The government has reported 28,696 confirmed cases of the coronavirus in the past seven days, the highest weekly rise since the pandemic began.

The monthly infection rate was the highest in June-July last year with 100,000 cases detected in the 30 days from Jun 18, after the first cases were confirmed on Mar 8.

The outbreak ebbed in Bangladesh in late 2020 and early 2021, but the daily count is now seeing sharp rises, with more than 5,000 cases for the first time on Monday, taking the number of patients past 600,000.

With over 5,000 cases again and another 45 fatalities reported on Tuesday, the death toll has almost touched 9,000.

We’ve seen that people tend to avoid going outside. Later, the infection rate rose among those who were going out for work. Now everyone is going out, especially the young. So, the rate of infection among them is high,” Meerjady Sabrina Flora, additional director general of health services, said at a press conference on Monday.

In the seven days until Tuesday, the death toll rose by 256. The highest number of 302 patients died in the week from Jun 26 last year when the fatalities peaked, with the single-day record on 64 reported on Jun 30.

The positivity rate among the people who gave sample for tests remained above 20 percent most of the days between May and August last year, peaking to 33 percent on Jul 12.

In mid-January this year, the positivity rate dropped below 5 percent and hovered between 2 percent and 3 percent throughout February.

It has increased again to around 19 percent now.

Coronavirus cases are rising across Bangladesh, but the Directorate General of Health Services has flagged 29 districts for COVID-19 risks with high infection rate. They include Dhaka, Chattogram, Narayanganj, Munshiganj, Feni and Chandpur.

To contain the outbreak, the government has issued a set of 18 instructions, including curbs on all sorts of assembly.

Besides a decision to restrict inter-district travel in high risk areas, it has ordered operators to keep half the seats empty on public transports.

It has also mandated 14-day quarantine for travellers from Europe.

Nazmul Islam, a director at the DGHS, has reminded all of the need to follow health rules – wearing masks, maintaining physical distancing, and regularly washing hands with soap and water or sanitiser.

“We’re immensely satisfied in past two to three months after following the health rules for a year. This has led to a rise in infection. We shouldn’t blame a new strain. We can control it if we become careful now,” he said.