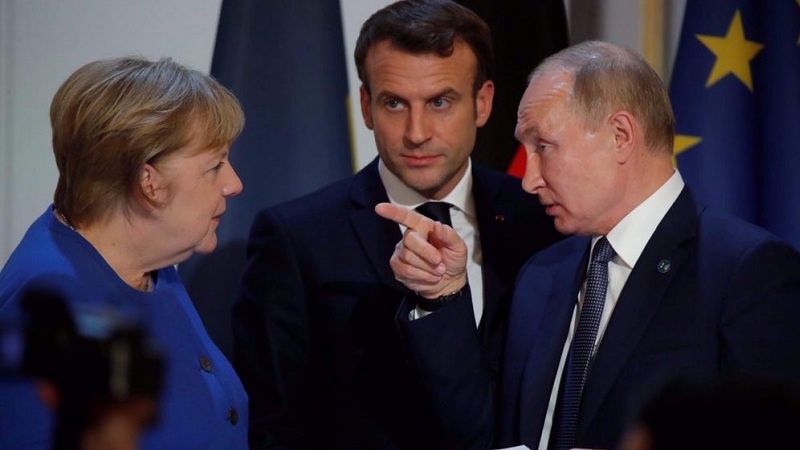 The leaders of Russia, France and Germany, which are signatories to the 2015 nuclear deal, have exchanged views on the multilateral accord amid the standoff between Iran and the United States over the implementation of the agreement.

The Kremlin said the trio spoke in favor of “preserving and implementing” the JCPOA and “further coordinating steps in this direction.”

Separately, the Elysee Palace said in a statement that three leaders had agreed to take measures on the nuclear pact and coordinate their efforts to return Iran to full compliance with its international obligations as soon as possible.

In 2015, Iran and the P5+1 group of countries, the US, the UK, France, Russia, and China plus Germany, signed the JCPOA, which was ratified in the form of UN Security Council Resolution 2231.

Three years later, however, former US President Donald Trump unilaterally pulled the US out of the JCPOA and reinstated the anti-Iran sanctions that had been lifted by the agreement.

The new US administration, under President Joe Biden, has claimed it is willing to rejoin the JCPOA, but conditioned the move on Tehran’s resumption of the obligations it has suspended under the Article 36 of the nuclear agreement in response to the unilateral US withdrawal in 2018 and the other parties’ failure to meet their end of the bargain.

However, Tehran says the US, as the first party that reneged on its commitments, should take the first step towards the deal’s revival.

Last week, Leader of the Islamic Revolution Ayatollah Seyyed Ali Khamenei stressed that Washington must first lift all the sanctions it has imposed on Tehran in a verifiable manner before the Islamic Republic would return to full compliance with the JCPOA.

Earlier on Tuesday, Iran rejected a report in the US publication Politico saying Washington planned to put forth a new proposal that would ask Tehran to halt work on advanced centrifuges and the 20 percent uranium enrichment in return for the lifting of some sanctions.

“No proposal is needed for the US to rejoin the JCPOA. It only requires a political decision by the US to fully and immediately implement all of its obligations under the accord and abide by UNSCR 2231,” Iran’s Permanent Mission to the UN tweeted.

Meanwhile, three Western officials claimed that the US and Iran had mainly communicated indirectly via the European parties to the deal, alleging that Tehran now wants to discuss a broader plan to return to the pact, Reuters reported.

“It sounds from what we are hearing publicly now, and through other means, that they may be … not interested in (discussing) initial steps but in a road map for return to full compliance,” said a US official who, who was speaking on condition of anonymity. “If that’s what Iran wants to talk about, we are happy to talk about it.