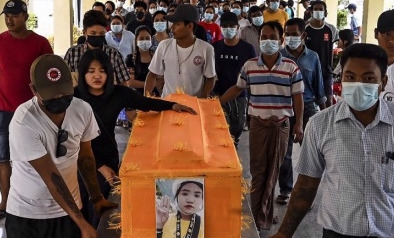 An advocacy group says more than 700 people have so far been killed in the ongoing brutal crackdown by the country’s junta on anti-coup protesters.

Media reports said Saturday that security forces gunned down and killed at least 82 protesters the previous day in the city of Bago, 65 kilometers northeast of the largest city of Rangoon.

The United Nations office in Myanmar said late Saturday that it was following the bloodshed in Bago, where it said medical treatment had been denied to the injured.

Despite the bloodshed, protesters continued to rally in parts of the country.

University students and their professors marched through the streets of second-biggest city Mandalay and the city of Meiktila on Sunday morning.

Protesters in Rangoon, as well as in the city of Monywa called for UN intervention to prevent further bloodshed.

People across the country have been urged to participate in a torchlight protest in their neighborhoods after sunset on Sunday night.

Meanwhile, 19 people had been sentenced to death for robbery and murder by a military court on Friday. They were arrested in Rangoon’s North Okkalapa township, one of six areas in the commercial hub currently under martial law.

Myawaddy Bank’s biggest branch in Mandalay was targeted on Sunday morning and a security guard was injured in the explosion.