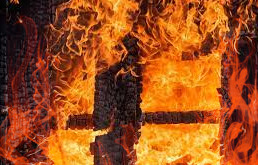 The fire was completely doused and no casualties were reported

A fire broke out at a Rohingya camp in Cox’s Bazar’s Ukhiya upazila again.

The incident occurred at the Balukhali refugee camp no 9 at around 2:30pm on Monday.

Contacted, Ukhiya Fire Service Station Officer Md Emdadul Haque said: “We had rushed to the spot as soon as we were informed about the fire. But locals were able to douse the fire before we could reach the camp.
Only a madrasa was gutted in the fire. No major damage was reported in the incident.”

The cause of the fire could not be ascertained immediately.
Earlier on March 22, a deadly fire broke out at the same camp that left at least 11 dead and over 500 injured.