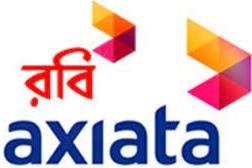 Robi Axiata, which did not give the investors dividend despite its listing on the stock market, has reported a more than 82 percent growth in profit after tax or PAT in the first quarter of 2021.The mobile phone operator’s PAT rose to Tk 343 million in the January-March quarter this year from Tk 188 million in the same period last year.

The second largest telecom operator of Bangladesh in terms of subscriber base, Robi published the unaudited financial report for the latest quarter at a press conference in Dhaka on Sunday.

Robi’s earnings per share or EPS rose to Tk 0.7 from Tk 0.4 a year ago, according to Dhaka Stock Exchange.

Robi decided not to give the investors dividend for last year’s business despite a 725 percent rise in EPS.

That the authorities “did not deliver on their word to withdraw minimum 2 percent turnover tax was the reason behind Robi’s decision not to announce dividend, the company said.

The minimum tax on gross revenue “continues to undermine Robi’s growth potential”, the company reiterated on Sunday.
“Not just that, this unjust tax has also denied us the benefit of slightly reduced corporate tax rate (40 percent) offered to the listed telecom companies. It is more concerning that our general shareholders are being deprived of the value despite significant contributions to the bourses,” Robi CEO and Managing Director Mahtab Uddin Ahmed said.

The company, however, on Sunday said its board of directors has recommended an interim cash dividend at the rate of 3 percent of the paid-up capital of the company, or Tk 0.30 per share of Tk 10 each.

The decision was taken at the board meeting held on Apr 8. It is expected to get the final nod at Robi’s 25th Annual General Meeting on Apr 12.

Its subscriber base grew by 1 million to 51.9 million in the quarter. As much as 70.6 percent of the Robi subscribers are internet users.