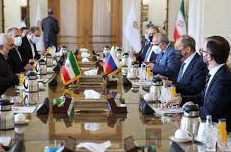 Russian Foreign Minister Sergei Lavrov has condemned the European Union for imposing sanctions on Iran at a time when Tehran and the signatories to the 2015 nuclear deal are engaged in a diplomatic process in Vienna to save the troubled agreement.

“We expect that it will be possible to preserve the Joint Comprehensive Plan of Action (JCPOA),” said the top Russian diplomat, adding, “As far as we understand, our partners in Tehran have expressed their readiness to immediately move in that direction” if Washington returns to compliance with the deal it abandoned.

However, he added, the latest EU sanctions gave rise to “a huge amount of questions.”

The EU said in its official journal on Monday that it had imposed illegal sanctions on eight Iranian commanders, including Chief Commander of the Islamic Revolution Guards Corps (IRGC) Major General Hossein Salami, and three prisons over so-called human rights violations.

The sanctions some at a sensitive time as Brussels is mediating the diplomatic efforts in Vienna to make the US lift its illegal sanctions on Iran and rejoin the deal so that Tehran would reverse the retaliatory measures it has been taking under Article 36 of the JCPOA.

“If there is any kind of coordination lacking in the EU and the right hand is not aware of what the left hand is doing, that’s simply unfortunate,” Lavrov said. “But if this decision has been deliberately taken amid the talks continuing in Vienna to rescue the JCPOA then it is not just unfortunate — this is a mistake that is worse than a crime.”

“I hope our European colleagues understand that such actions are unacceptable and will take measures not to allow the talks to be derailed,” the top diplomat added.

The EU’s move was firmly rejected by Tehran, which said later in the day that said it would respond by suspending talks with the bloc on human rights and all resulting cooperation, including that on terrorism, illicit drugs, and refugees.

Zarif, for his part, lashed out at the Europeans imposing sanctions on Iran instead of condemning America’s economic terrorism against 82 million Iranians and Sunday’s incident at Natanz nuclear facility.

The sanctions, he added, only make the world realize that the EU “has no status [of its own] in the world, and that it is not only a follower of American policies, but also a follower of the most extremist groups in the United States and the Zionist regime.”

“This is a reason for Europe to be ashamed. It is definitely a destructive action and we will definitely respond to this action,” the top Iranian diplomat said.

Zarif advised the Europeans to “think about their dignity. Europe should know that it is not in a superior moral position. Europe cannot preach to the world. A Europe, where xenophobia and anti-Islamism have created terrible conditions for Muslims, has neither the reputation nor the position to sanction the Iranian authorities.”

On incident at Natanz

Elsewhere in his remarks, Zarif said that what happened at Natanz nuclear facility was “a terrorist stupidity” aimed at undermining Iran’s leverage in the talks on the JCPOA’s revival.

“I assure you that in the near future, Natanz will definitely move forward with more advanced and powerful centrifuges. If the Israelis thought that they could stop Iran from following up on the removal of sanctions imposed on the Iranian people, then they made a very bad gamble,” he noted.

The Iranian foreign minister also warned that Israel will receive a response if Iran’s investigations hold the regime responsible for the Natanz incident.

He further urged the US to understand that sanctions cannot serve as a means of getting concessions.

After 42 years of testing the Iranian people, the United States should have realized by now that threats, sanctions, and nuclear terrorism are not the right way to treat Iran, said Zarif. “The Americans need to know that neither sanctions nor acts of sabotage will give them the tools to negotiate, and that these actions will only make things more difficult for them.”