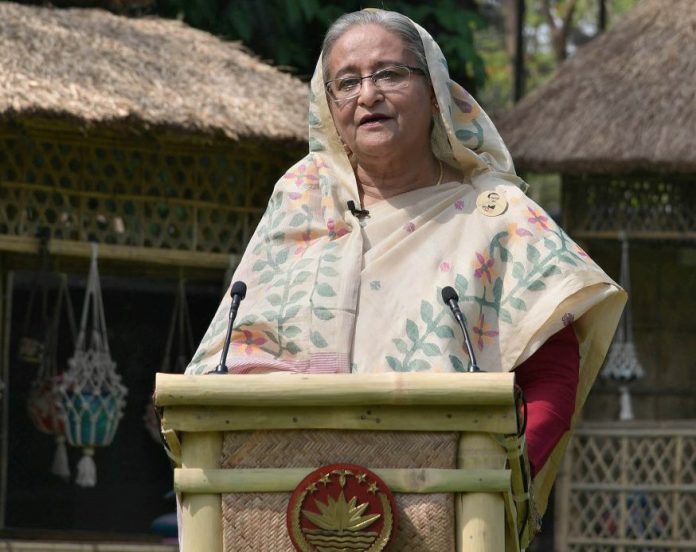 Prime Minister Sheikh Hasina will deliver a speech on Tuesday on the celebrations of Pohela Boishakh, the first day of the Bangla calendar, which is on Wednesday.

She is scheduled to address the nation at around 7:30pm, Prime Minister’s Press Secretary Ihsanul Karim confirmed the matter, reports UNB.

The speech will be broadcast by Bangladesh Television, Bangladesh Betar as well as private television channels and radio stations.

Meanwhile, the Dhaka University authorities have decided to cancel Mongol Shobhajatra, a mass procession that is brought out on the morning of Pohela Boishakh, this year in light of the sharp rise in Covid-19 infections.
This is the second consecutive year that Mongol Shobhajatra, an integral part of Bangla New Year celebrations, has been cancelled due to Covid-19.

The university’s public relations office issued a notice in this regard on Monday, saying that the decision had been made considering the upcoming nationwide strict lockdown, which will be effectiv
This year, the country has been again seeing a steep rise in Covid-19 deaths and infections in the last few weeks, with the highest ever single-day death tally and caseload recorded in the country in the past couple of days.

Bangladesh recorded the highest deaths, yet again, on Monday as 83 people died of the novel coronavirus over the last 24 hours.

The daily death rate has broken all previous records for three consecutive days. On Sunday, the highest single-day death toll was recorded with 78 deaths since the first Covid-19 death in Bangladesh on March 18, 2020. A day before, it was 77.

Meanwhile, 7,219 tested positive over the same time, taking the total number of infections to 691,957.

The country reported its first Covid-19 death on March 18 last year, 10 days after the first case was recorded.