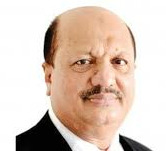 Former law minister Abdul Matin Khasru has died while receiving treatment at the Combined Military Hospital (CMH) in Dhaka. He was 70.

According to his personal aide, Matin Khasru was taken to life support around 11:30am on Tuesday. Earlier, he was moved to a cabin on March 31 when his condition had improved.

Matin Khasru was infected with Covid-19 and was under treatment at the hospital from March 16.

The 71-year-old lawmaker is left behind by two children – one son and one daughter – along with a host of family and friends to mourn his death.
In a condolence message, the president said the nation will always remember Matin Khasru’s contribution to the abolishment of the Indemnity Ordinance paving the way for the trial of the killers of Father of the Nation Bangabandhu Sheikh Mujibur Rahman.

“Besides, his [Khasru] role to the establishment of parliamentary democracy and the rule of law will remain bright in the history of the country’s parliamentary affairs forever,” President Hamid added.

The head of state prayed for eternal peace of the departed soul and conveyed deep sympathy to the bereaved family.

In a condolence message, Sheikh Hasina said Khasru as a learned lawyer and leader of mass people will live forever in the heart of the people.

“He contributed significantly in the ascension of the country’s law and judicial system,” she said.

Momen said the nation has lost one of its most prominent lawyers.

“The nation will forever commemorate the contribution of this five-time MP,” he said.

Abdul Matin Khasru got elected as the member of parliament of Comilla-5 (Brahmanpara-Burichang) constituency for the fifth time in the 2018 general elections.During the Awami League led government of 1996 to 2001, he served as the law minister.

Recently, on March 16, he got elected as the president of the Supreme Court Bar Association.

Matin Khasru was born on February 12, 1950 in the Mirpur village of Brahmanpara upazila of Comilla district of then East Pakistan.

He started his profession as a lawyer at the Comilla Judge Court in 1978.

Later, from 1982, he started regular practice in the High Court Division of the Bangladesh Supreme Court.

Khasru actively took part in the Liberation War of 1971.

He was a valiant freedom fighter and played the role of the commander of Burichang police station in Comilla district during the war.

He contested for elections with the Awami League ticket and held the parliamentary seat between 1991 and 2001. He served in the first Hasina’s cabinet as Minister of Law and Justice from 1997 to 2001. Although he lost the seat to Md Yunus in the 2001 general election, he regained it in the December 2008 general election.

Khasru was elected chairman of the executive committee of the Bangladesh Bar Council in 2015. The following year he was made the law secretary of Bangladesh Awami League. He became a member of the party’s presidium in 2017.