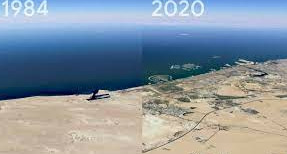 Google has added more enhancements to its impressive Timelapse feature to show in greater detail than ever how our planet has changed over the last 37 years.

Google launched its Timelapse feature in 2013, though at the time it was in 2D. The latest update adds 3D imagery, with the new content representing the biggest update to Google Earth in four years.

The newly enhanced Timelapse feature reveals dramatic changes in our precious planet, from retreating glaciers and deforestation to eroding coasts and expanding cities.

Watch the emergence of Dubai in the United Arab Emirates, and the retreat of the shoreline of Kazakhstan’s Aral Sea, once the world’s fourth-largest inland body of water but now shrinking as the rivers that feed it are diverted for irrigation projects.

You can view some examples of Google Earth’s Timelapse feature in the video at the top of this page, though read on to find out how you can use the tool to explore the content by yourself.
The Timelapse feature uses around four million satellite photos captured since 1984 that have been compiled to create an impressive interactive experience. “Now anyone can watch time unfold and witness nearly four decades of planetary change,” Google Earth’s Rebecca Moore said in a blog post about the update.

She added that creating Timelapse in its latest iteration required “out-of-this-world collaboration” involving NASA, the U.S. Geological Survey, the U.S. government, and the European Union.
How to use Google Earth Timelapse

Go to g.co/Timelapse and use the search bar to select any location on Earth where you want to see time in motion.

Alternatively, open Google Earth and click on the wheel to find Timelapse in the tool’s storytelling platform, Voyager, to enjoy interactive guided tours.

You can also find more than 800 Timelapse videos in both 2D and 3D for public use at g.co/TimelapseVideos. You can select any video as a ready-to-use MP4 video or simply watch the footage on YouTube.

“From governments and researchers to publishers, teachers, and advocates, we’re excited to see how people will use Timelapse in Google Earth to shine a light on our planet,” Moore said.