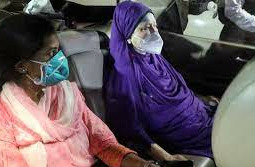 BNP Chairperson Khaleda Zia will continue receiving treatment for COVID-19 at home as her doctors have ruled out hospitalisation following a CT scan.“Her report is very good,” said Professor AZM Zahid Hossain, one of her personal physicians after the test at Evercare Hospital on Thursday night.

“We can clinically say that the findings in the report show minimum [risks]. She will undergo necessary treatment at home,” the doctor said.

A car carrying the former prime minister left her home in Gulshan for the hospital in Bashundhara around 9:20pm and returned around 10:50pm.Professor FM Siddiqui, who is heading the team of doctors treating Khaleda, confirmed that she underwent the test at the hospital.

Earlier, after visiting her, Siddiqui said Khaleda had “a little” fever, but was “stable”.
Khaleda’s body temperature went up slightly to 100 degrees Fahrenheit on Wednesday night and it stayed there on Thursday morning, the doctor said.

“Her chest is clear, so we think she is doing well and stable,” he said.

The 75-year old politician, who has diabetes and arthritis, was diagnosed with COVID-19 on Apr 11. As many as eight staffers, including her personal carer Fatema Begum, at her home in Dhaka’s Gulshan also tested positive for the disease.

Prof Siddiqui said Khaleda’s blood sugar was “under control” as the doctors were using medication and insulin. She is also having physiotherapy for arthritis, the doctor said.

Her biochemical parameters, physical status, oxygen saturation, appetite, pulse, blood circulation and other parameters were normal, according to him.
The doctors wanted the CT scan done as soon as possible because “you can’t say when a coronavirus patient’s condition will change”, Siddiqui said.

A CT scan or computed tomography scan is a medical imaging technique used in radiology to get detailed images of the body noninvasively for diagnostic purposes.

Khaleda has been living in her Gulshan residence since the government suspended her imprisonment order in March 2020.

She had served 25 months out of 17 years of prison sentences in two graft cases, involving Zia Orphanage Trust and Zia Charitable Trust.