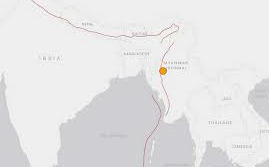 An earthquake centred in Myanmar has sent tremors in the southern regions of Bangladesh, including Chattogram and Cox’s Bazar
The 5 magnitude quake struck at 7:24pm on Sunday, according to Zahirul Islam, an official at the Meteorological Department’s earthquake observation centre.
The epicentre of the earthquake was 414 km south-east of Dhaka, 274 km east of Chattogram and 258 km east of Cox’s Bazar in Myanmar’s Hakha region.

Earlier on April 5, tremors were felt in several parts of the country, including the capital, due to an earthquake in Bhutan.
source:bdnews24