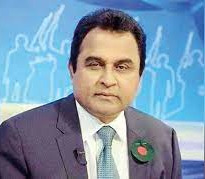 ‘No proposal from you (business community) is irrational’

Finance Minister AHM Mustafa Kamal on Sunday said the next budget for FY 2021-22 will reflect rational demands from the businessmen.

“No proposal from you (business community) is irrational. We have delivered a business-friendly budget last year and you’ll see such reflection this time also,” he said.
The finance minister was addressing the virtual NBR-FBCCI consultative meeting ahead of the national budget for the next fiscal year (FY22).

He also said the businesses would have to move forward becoming stronger.
The NBR in cooperation with the FBCCI holds the consultative committee meeting every year ahead of the national budget and in line with this, the meeting was held this time in virtual platform due to the Covid-19 pandemic.

In his speech, Kamal extended his thanks to the business community for continuing their business operations and also providing taxes for the state coffers despite this difficult period.
During the meeting, FBCCI president Sheikh Fazle Fahim placed a set of proposals before the government on income tax, VAT and customs for considering those in the next budget.