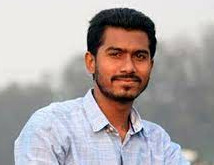 A case has been started against Nurul Haque Nur, a former vice president of DUCSU, under the Digital Security Case on charges of making incendiary remarks and insulting the religious values of the Awami League leaders and activists during a livestream on Facebook
Ashraful Islam Shojib, a member of the Jubo League’s central committee, filed the case with Shahbagh police on Sunday, according to the station’s OC Mamun-ur-Rashid.

“He has been charged under several sections of the Digital Security Act for making provocative remarks on Facebook that hurt religious sentiments.”

On Apr 14, Nur went live on Facebook and began pushing the narrative of Hifazat-e Islam leaders against the Awami League.

“No Muslim can support the Awami League. The Muslims who do support the Awami League are extortionists, swindlers, drug dealers and cheaters. They will attend the Friday prayers but won’t offer a single daily prayer.”
Nur claimed the incident involving Hifazat-e Islam leader Mamunul Haque, in which he was caught with a woman at a resort in Narayanganj, was part of a ‘ploy’ by the government.

“The way the extremists of the Awami League are spreading hatred against the scholars [of Islam], tainting their character — these people cannot be Muslims. They have no faith. ”

According to the case statement, the video has been shared by several anonymous IDs and pages on Facebook, garnering a multitude of comments from ordinary users, many of which contained anti-government and anti-state rhetoric.

“As a devout Muslim and a member of the Awami family, I think his statement has hurt our religious feelings. So, I have filed a case against him,” said Shojib .