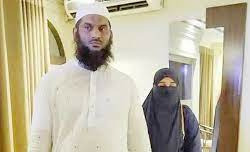 Hifazat-e-Islam’s Joint Secretary General Mamunul Haque has told the police that he has three wifes amid speculation surrounding his marital status. But only one of the marriages have been registered in line with Muslim family law.
He divulged the information during interrogation by the police following his arrest on Sunday, according to Harun-ur-Rashid, deputy commissioner of Tejgaon Division.

Mamunul has been under the spotlight after being detained with a woman, who he claimed is his second wife, at a resort in Narayanganj’s Sonargaon on Apr 3.

Apart from his alleged links to various incidents of vandalism and violence, he also attracted scrutiny over his multiple wives.

Harun Ur Rashid, deputy commissioner of Tejgaon division, interrogated him on Sunday night after his arrest. He told media that Mamunul had admitted to having three wifes.

“There is a Kabinnama (Muslim marriage deed) for only one of the three marriages. Mamunul said that he did not register the other two marriages,” said Deputy Commissioner Harun.

Another police official said Mamunul told law enforcement that the woman (Jannat Ara Jharna) who was with him in Sonargaon was his second wife.
He also confessed to having a third wife, named Jannatul Ferdous Lipi. But only his marriage to his first wife, Amena Tayyaba, has a certificate.

The Kabinnama acts as an evidentiary document under Muslim family law and all marriages must be registered. Failure to register a marriage is a punishable offence, which may result in imprisonment for up to 2 years and a fine of Tk 3,000 or both. However, the marriage will not be annulled.
The hardline Islamist leader was arrested at Jamia Rahmania Arabia Madrasa in Mohammadpur on Sunday in a case filed with Mohammadpur Police Station in 2020, according to the police.

“He was arrested after investigators found clear evidence of his involvement in the incident,” said Harun Ur Rashid, Tejgaon division deputy commissioner.

During interrogation, Mamunul told police that he used to spend more time with his younger wife but he did not say when they got married.
In a general diary filed with Mohammadpur police on Apr 11, a man named Shahjahan from Gazipur said Mamunul had called him over to Jamia Rahmania Arabia Madrasa on Apr 10 and told him that he had married his sister Lipi, according to the police official.

At the time, Lipi said she was staying with a woman named Dilruba at her house in Mohammadpur, Shahjahan stated in the GD.

Following his arrest, Deputy Commissioner Harun said Mamunul would also be questioned about the GD.

Meanwhile, Mamunul’s second wife Jharna and third wife Lipi are both staying in Mohammadpur, according to the detective police.

An official said they were both under surveillance and would be questioned if necessary. Mamunul’s first wife Amena also lived in Mohammadpur. However, her current whereabouts are not known after she left home with her children following the resort scandal

A Dhaka court on Monday issued a remand order allowing police to interrogate Mamunul in their custody for seven days.

Mamunul, joint secretary general of the radical group, was known for his hate speech and aggressive sermons in religious congregations and on social media, enjoying popularity among hardliners.