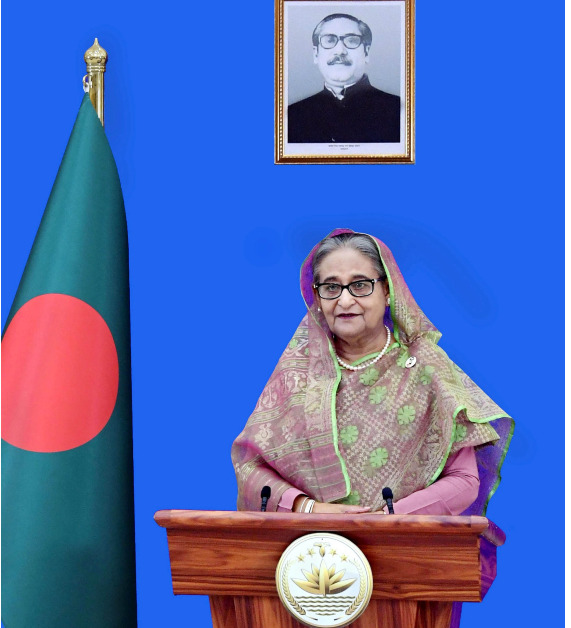 Prime Minister Sheikh Hasina has said that the government gives immense importance to the development of agriculture as it can take Bangladesh forward.

“We’re giving great importance to agriculture as our agro-based economy will take us forward,” she said.

The prime minister said this in a video message, broadcasted by state-run BTV, marking the founding anniversary of the Bangladesh Krishak League on Monday.

She said the government is extending all-out cooperation to farmers through marketing their products and their export. “Bangladesh is an agricultural country, and agriculture is the driving force for our development.”

Sheikh Hasina also said the government has given special attention to industrialization alongside the development of agriculture.

She greeted the farmers on the occasion of the founding anniversary of Bangladesh Krishak League as they produce food grains working under the scorching sun, heavy rains, and after huge sweating. “We’re living on consuming the food they produce.”

Hasina said the government always supported the farmers of the country. “We, especially Awami League, think it is our duty to do so,” she said.

She mentioned that whenever Awami League comes to power farmers do not have to suffer. “Because we take appropriate measures for them.”

The premier said the government has introduced a system through Krishi Bank so that the sharecroppers can avail of collateral-free loans.

She said the government has reduced the prices of fertilizer to Tk12, which was Tk90 during the BNP regime.

The prime minister said the government has given utmost importance to research to improve crop production in Bangladesh.

She mentioned that Awami League has given importance to agricultural research since it formed the government in 1996.

Hasina said now research is going on extensively to produce new varieties of crops, vegetables, fruits, and food grains and the government is providing high-yielding seeds.

“As a result, the farmers now can produce more food with little labour, they can produce rice, wheat, corn, and all types of crop, and we’re creating a scope for the marketing of those,” she said.