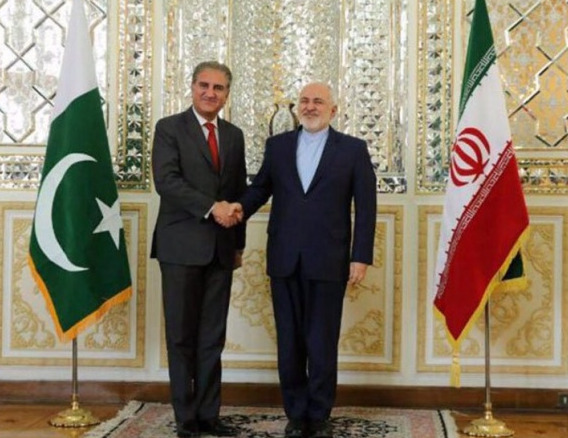 Qureshi arrived in the Iranian capital on Tuesday for a three-day official visit, which is taking place at the invitation of his Iranian counterpart, Mohammad Javad Zarif.

According to a Tuesday statement by Pakistani Ministry of Foreign Affairs, the top Pakistani diplomat plans to have delegation-level talks with Zarif, President Hassan Rouhani and Speaker of the Parliament Mohammad Baqer Qalibaf during his stay.

Qureshi will also travel to the holy city of Mashhad.

During the visit, Iranian and Pakistani officials will open the third border crossing between the two countries.

Zarif and Qureshi will “review bilateral relations with a view to further deepening cooperation in diverse fields,” the statement said.

“The two sides will discuss regional security situation including the latest developments in the Afghan Peace Process and the Jammu & Kashmir dispute. They will also deliberate on strengthening regional cooperation under the umbrella of Economic Cooperation Organization,” it added.

It further said that the visit is part of regular high-level exchanges between the two countries, which follow a trip by the Iranian foreign minister to Islamabad in November 2020. The two foreign ministers also met on the sidelines of the 9th Heart of Asia-Istanbul Process (HoA-IP) ministerial conference in Tajikistan’s capital of Dushanbe in late March.

Prior to his departure for Tehran on Tuesday, the Pakistani foreign minister shed light on the objectives and purposes of the visit in a video message.

“There have been several developments in the Afghan peace process,” the minister said. “Being neighbors to Afghanistan, the peace process is equally important for Iran.”

He emphasized that he would be informed about Iran’s views in this regard so that “the two sides will be able to develop a focus of strategy following talks.”

Qureshi expressed gratitude for Leader of the Islamic Revolution Ayatollah Seyyed Ali Khamenei for his clear stance on the Kashmir issue.

“We will also talk about progressing with regard to the bilateral relations. Iran had expressed interest in Pakistan’s proposal of border markets, and we would talk about it, too,” the Pakistani foreign minister said.

He added that Iran is not only a neighbor of Pakistan but also a tested friend, saying, “We have always supported each other in difficult times.”

“We will be in efforts to cement the existing bilateral relations and bring stability in them,” Qureshi said.

At a recent meeting with top Pakistani media figures and researchers, Pakistan’s Prime Minister Imran Khan expressed hope that the sanctions against Tehran will be lifted, saying the Islamic Republic of Iran has the capacity to turn into an economic power in the region.