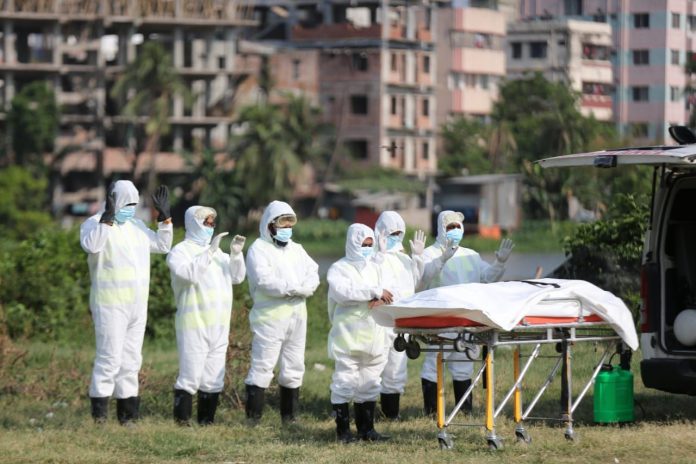 Bangladesh has registered 95 deaths from Covid-19 in the 24 hours to Wednesday morning. With the latest development, the total number of deaths reached 10,683 in the country.

This is the second day in a row when the country recorded below 100 deaths after seeing a huge spike in in the past week.

The country also logged a total of 732,060 coronavirus cases with 4,280 people testing positive over the same period.

The Directorate General of Health Services (DGHS) revealed the latest figures on Covid-19 in the country with a press release on Wednesday.

The seven-day moving average of daily deaths in the country stood at 99.43 which was lower than Tuesday.
Of the 95 deceased – 59 men and 36 women – 58 were from Dhaka division; 17 from Chittagong; Eight from Rajshahi; three each from Khulna, Sylhet, and Rangpur, two from Barisal; and one from Mymensingh division.
Of them, 60 patients died in government hospitals, 31 in private hospitals, and four at home.

The mortality rate against the total number of cases detected so far stands at 1.46%.

The health authorities said 7,072 people recovered from the disease over the preceding 24 hours.

On March 8, health authorities in Bangladesh reported the first three cases of Covid-19, a severe acute respiratory illness caused by a new coronavirus strain which was later named Sars-CoV-2.

The novel coronavirus broke out in China’s Wuhan city in late December, 2019 and quickly spread throughout the world, becoming a pandemic in less than three months.

The fast spreading coronavirus has claimed 3,060,928 lives and infected 143,673,350 people across the world till Wednesday afternoon, according to Worldometer.

As many as 122,048,479 people have recovered from Covid-19 which has spread to 219 countries and territories across the planet.