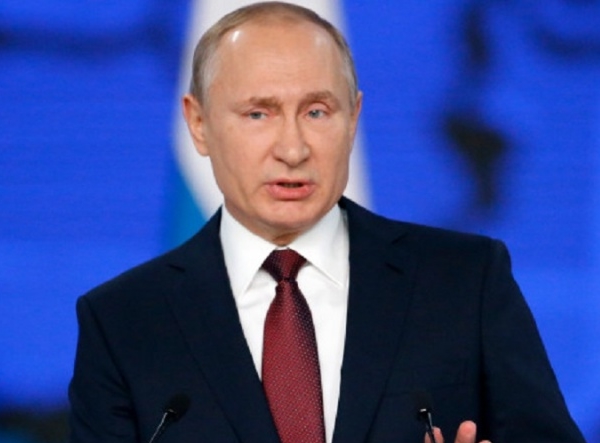 Russian President Vladimir Putin has expressed willingness to invite his Ukrainian counterpart to discuss bilateral ties amid a military escalation between the two sides near Ukraine’s southern borders and the Crimean Peninsula.

According to presstv reports, Putin said on Thursday that he was ready to host President Volodymyr Zelenskiy for talks in Moscow “at any time convenient for him,” but stressed that the Ukrainian leader should first discuss the conflict with separatist leaders in the eastern Ukrainian region of Donbass.

“If we are talking about bilateral relations, then, by all means, we are ready to welcome the president of Ukraine at any time that is convenient for him,” the Russian president said.

“If President Zelensky wants to start repairing relations, then we of course welcome it,” he added, underlining that the Ukrainian president should hold face-to-face meetings with leaders of the breakaway regions in Donetsk and Lugansk to pave the way for an end to the fighting in eastern Ukraine.

“And only then discuss these issues with representatives of third countries, which in this the case is Russia,” Putin said.

Putin’s invitation came in response to this week’s offer from Zelensky for the two presidents to meet in eastern Ukraine, where an uptick in clashes between Kiev’s troops and pro-Russian forces has raised fears of a return to a full-blown war.

The Kremlin has warned that the US and NATO are turning Ukraine into a “powder keg” by increasing arms supplies to Kiev and inflaming tensions in the country’s volatile east.

Russian Defense Minister Sergei Shoigu announced on Thursday that he has ordered troops participating in military drills in the Crimea region to return to their permanent bases by May 1.

“I consider the goals of the snap check of readiness fulfilled,” Shoigu said. “The troops have shown their capability to defend the country and I decided to complete the drills in the South and Western military districts.”

The Russian defense minister underlined that the troops had successfully completed drills near Ukraine but they should leave their weapons behind for another exercise later this year.

The Ukrainian president welcomed the end of the drills and the Russian troops’ pullback, saying the move could lead to reduced tensions between Kiev and Moscow.

“The reduction of troops on our border proportionally reduces tension,” Zelenskiy said on Twitter, adding that Ukraine remains vigilant but “welcomes any steps to decrease the military presence and deescalate the situation in Donbas.”

Kiev and Moscow have traded blame in the past weeks for a spike in violence in the Donbass, where Ukrainian troops and pro-Russian forces have been fighting a conflict that has killed 14,000 people since 2014 by Ukraine’s estimate.