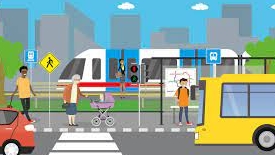 Road Transport and Bridges Minister Obaidul Quader has said the government is considering lifting the ban on public transport, conditionally in compliance with the health rules, after the ongoing lockdown period ends.

He, however, said that even when the lockdown period ends, use of masks and hand sanitizers will be made mandatory.

Quader, also the general secretary of the ruling Awami League, made the statement while virtually attending a views-exchange meeting with officials of Barisal Road Zone, BRTC, and BRTA on Saturday.

Earlier in the morning, Bangladesh Road Transport Authority (BRTA) hinted that the government is likely to lift the ban of public transport after April 28.

“However, a gazette will be issued before April 28 regarding the new operational procedures for public transport amid the resurgence of Covid-19,” he added.
Following a meeting with the minister, Bangladesh Road Transport Owners’ Association Secretary General Khandaker Enayet Ullah said that they have been informed that public transport will remain suspended until April 28, including city and long route buses.

“However, public transport will resume after April 28 once the strict lockdown is relaxed,” he told media.

Starting from April 7, the country has gone through a soft lockdown and a strict lockdown. Earlier, the government had imposed an 18-point restriction in movement.