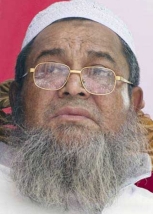 The existing central committee of Hefazat-e-Islam Bangladesh has been dissolved.

Hefazat Chief Junayed Babunagari made the announcement through a Facebook video on Sunday night.
He said: “Following the advice of senior Hefazat leaders, the central committee of Hefazat has been dissolved considering the overall situation of the country.”

However, he said that the Islamic organization will resume its activities in the future after forming a convening committee.The move comes as the state cracked down on Hefazat-e-Islam leaders and activists with multiple arrests and cases over the last two weeks.

Many top Hefazat leaders have been arrested recently for their alleged involvement in the countrywide violence that claimed at least 17 lives during violent protests against Indian Prime Minister Narendra Modi’s Bangladesh visit last month.

Some Hefazat leaders have also quit the hardline Islamist group citing the recent mayhem. They claimed that they had nothing to do with all the atrocities and demanded exemplary punishment of those involved.