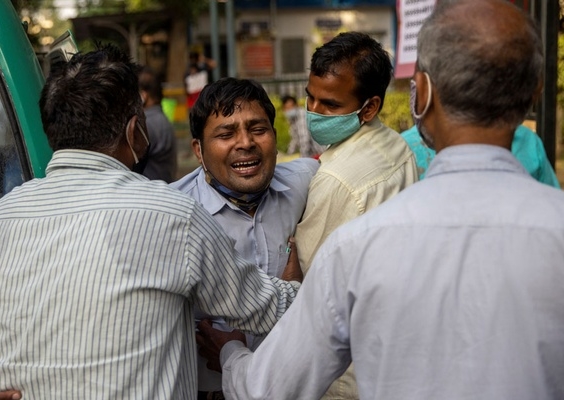 For Reuters photographer Danish Siddiqui, covering India’s second wave of the coronavirus pandemic is a daily circuit of crematoriums, cemeteries and hospitals, capturing the struggles of a nation of 1.4 billion people.
From that experience, he knew the situation at the Guru Teg Bahadur Hospital, a government-run facility in the capital New Delhi with 400 COVID ICU beds, might be chaotic.

But he was not prepared for what he saw on Friday: critical patients gasping for air on trolleys outside the already-full hospital ICU, some dying before ever being admitted.
Siddiqui and Reuters reporter Alasdair Pal had been at the hospital for only a few minutes when a rickshaw arrived carrying Shayam Narayan, a 45-year-old COVID patient and father of five.

Narayan’s brothers hauled him onto a hospital trolley and into the reception of the ICU. Just a few minutes later they were given the news: he was already dead.

The medical superintendent of the hospital was not available for comment. A spokesman from Delhi’s state government, which oversees hospitals in the capital, said patients had been arriving at the GTB hospital even though it had no way to accommodate them.
“Due to an exponential rise in COVID-19 cases in Delhi, all the hospitals are over-burdened,” the spokesman, Pritam Pal Singh, said. “Despite this, the government is trying its best to give all patients treatment.”

On the day of Narayan’s death, the country’s overnight infection total was higher than any recorded anywhere in the world since the pandemic began last year, for the second day running, at 332,730, according to federal health data.

Some 2,263 died, with over 300 of those in Delhi alone – figures that are almost certainly conservative, given the huge numbers of cremations and burials taking place in the country under COVID protocols, according to interviews with crematorium and cemetery workers.

India’s federal government did not respond to a request for comment on the casualty figures, but a state government health official told Reuters on condition of anonymity the mismatch may be caused by several factors, including over-caution in using COVID protocols even when a person might not have been positive.

Documenting the deaths is a delicate task, balancing showing the human cost of the virus with preserving the dignity of the subject.

“A news picture is about getting the moment to tell the story. It should also be respectful of your subject,” Siddiqui said. “If it’s not, then we won’t publish it.”
[Reuters]