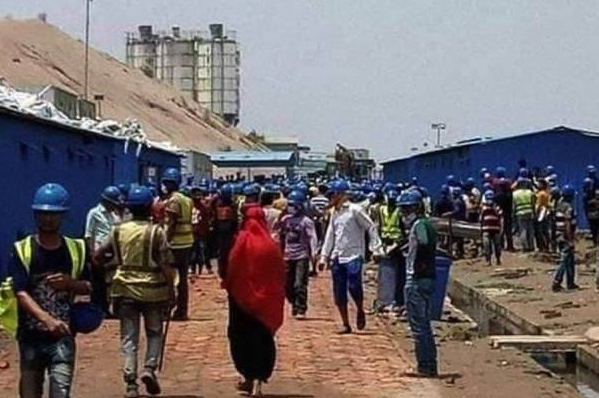 State Minister for Labour and Employment Begum Monnujan Sufian has announced to compensate Tk2 lakh to the families of each victim who lost their lives in a clash with police at Banshkhali coal-based power plant in Chittagong.

Besides, the junior minister also announced to provide Tk50,000 as treatment cost to each of the victims who sustained injuries in the incident.

She issued a statement in this regard on Monday.

Seven people were killed and multiple others injured in the workers-police clash at the power plant on April 17.

In her statement, Monnujan Sufian said: “The Banshkhali incident is an unfortunate incident. A family becomes helpless when one of its working members dies. There is a scope to provide financial assistance to the family from the Workers Welfare Fund of the Ministry.”

She also prayed for the salvation of the departed soul and the early recovery of those who were undergoing treatment in hospital.
Earlier, Gonoshasthaya Kendra founder Dr Zafrullah Chowdhury demanded Tk50 lakh compensation for the families of each worker killed in the clash at the S Alam Group’s coal-fired power plant in Banshkhali.

Dr Zafarullah placed the demand in front of the media while visiting the families on Sunday.

Along with the compensation, he demanded employment for the family members of the victims.

On April 17, five workers lost their lives and more than 30 sustained injuries as police open fired on protesting workers. They were agitating for payment of dues as well as breaks for prayer/iftar during Ramadan.

Later, two more workers succumbed to their injuries at a hospital.

Until now, two cases have been filed in this connection, blaming the workers for the incident. Victims’ families did not seek legal recourse.