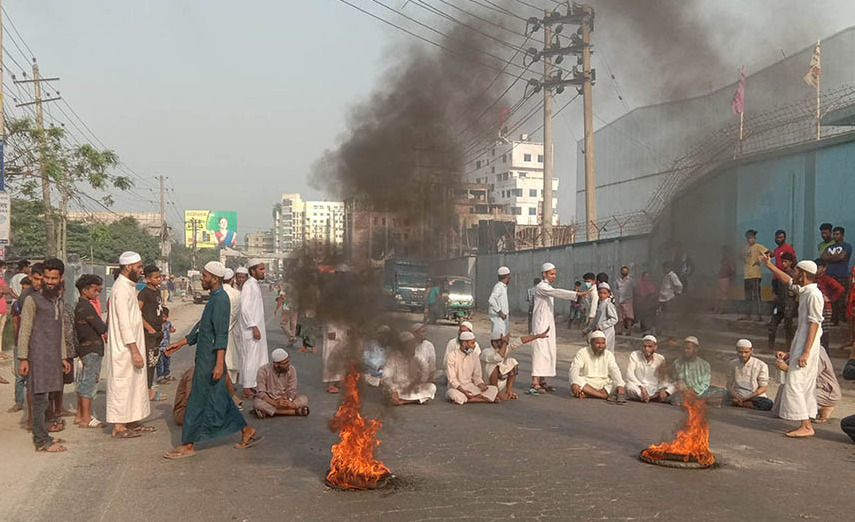 An EU-accredited non-profit think tank has lauded Sheikh Hasina government’s “robust” handling of terrorism and religious extremism in Bangladesh while ripping into Pakistan, saying its Muslim-majority neighbour has “encouraged, sheltered and promoted extremists and terrorists”.
The European Foundation for South Asian Studies or EFSAS in a commentary has shed lights on the rise of radical Islamist groups Hifazat-e Islam Bangladesh or HIB and Tehreek-e-Labbaik Pakistan or TLP in recent years, which has become the cause of a concern of the governments in the region.

Both organisations have proceeded against government decisions with violent and deadly protests.

In Bangladesh, a spree of arrests of top Hifazat leaders has prompted the organisation to dissolve its central committee in an apparent move to appease government anger after protests against Indian Prime Minister Narendra Modi’s visit.

But in Pakistan, TLP succeeded in forcing the government to debate its cause in parliament after protests demanding the expulsion of the French ambassador for the publication of the caricatures of the Prophet Muhammad in France.

“It is evident that while Sheikh Hasina has been making noticeable progress in dealing with the radical Islamist HIB, Pakistan has floundered dramatically in its inconsistent, ill-considered and ill-implemented attempts to pacify the TLP,” EFSAS said in the Apr 23 commentary headlined, “Bangladesh and Pakistan: acting against extremism versus making a show of acting against extremism”.
When France was responding to the beheading of a teacher by a Muslim man for showing the Prophet Muhammad’s cartoons in a class in October last year, thousands took to the streets of Bangladesh and Pakistan in protests organised by Hifazat and TLP against French President Emmanuel Macron’s comments supporting liberal views on religion.

Citing a TLP spokesman, Reuters reported that the political party called off the protests on Nov 17 after Imran Khan’s government signed an agreement that it will officially endorse boycotting the French products.

At the same time in Bangladesh, the police thwarted thousands of Hifazat activists from marching towards and laying a siege to the French embassy in Dhaka. The protests later wore off.

But TLP did not let go. Earlier this month, Pakistan banned the party declaring it a terrorist outfit after the killing of at least four police officers in clashes. At least 11 officers were at one point taken hostage.

Finally Pakistan’s government caved in and its parliament last week began debates on a resolution calling for the expulsion of France’s ambassador.

France had to advise its citizens to temporarily leave Pakistan and warned of serious threats to French interests in the country at the time.