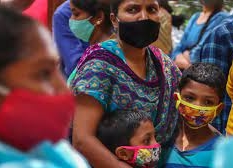 At Sir Ganga Ram Hospital, a huge facility in the middle of India’s capital, 37 fully vaccinated doctors came down with COVID-19 earlier this month
The infections left most with mild symptoms, but it added to their growing fears that the virus behind India’s catastrophic second wave is different. They wonder if a more contagious variant that dodges the immune system could be fuelling the epidemic inside the world’s hardest-hit nation.

So far the evidence is inconclusive, and researchers caution that other factors could explain the viciousness of the outbreak, which has overwhelmed India’s capital so quickly that hospitals are entirely overrun and crematories burn nonstop. Still, the presence of the variant could complicate the taming of India’s COVID-19 disaster.

India’s outbreak worsened even further on Wednesday, as authorities reported nearly 3,300 daily deaths. That brings the official total to nearly 201,200 people lost, though experts believe the true figure is much higher. Daily new infections also surged to nearly 357,700, another record.

As supplies run dangerously low and hospitals are forced to turn away the sick, scientists are trying to determine what role variants of the virus might be playing. They are working with precious little data. India, like many other countries, has not built up a robust system to track viruses.

India’s worries have focused on a homegrown variant called B.1.617. The public, the popular press and many doctors have concluded that it is responsible for the severity of the second wave.

Researchers outside of India say the limited data so far suggests instead that a better-known variant called B.1.1.7 may be a more considerable factor. That variant walloped Britain late last year, hit much of Europe and is now the most common source of new infection in the United States

“While it’s almost certainly true B.1.617 is playing a role, it’s unclear how much it’s contributing directly to the surge and how that compares to other circulating variants, especially B.1.1.7,” said Kristian Andersen, a virologist at the Scripps Research Institute in San Diego.

Beyond the variants, scientists believe there are other, possibly more obvious factors that could be powering India’s deadly second wave.

India has just scraped the surface in terms of vaccinating its population, with less than 2% fully vaccinated. Experts also blame lax public behaviour after last year’s first wave and missteps by Prime Minister Narendra Modi, such as recently holding large political rallies that may have spread the disease and sent a message to the people that the worst was over.
There is a lot of jumping to conclusions that B.1.67 is the explanation for what’s happening,” said Jeffrey Barrett, director of the COVID-19 genomics initiative at the Wellcome Sanger Institute in Britain. “These other things are probably more likely to be the explanation.”

Preliminary evidence suggests that the variant is still responsive to vaccines, although slightly less so. India relies heavily on the Oxford-AstraZeneca vaccine, which clinical trials show is less powerful than the vaccines made by Pfizer-BioNTech and Moderna and could perhaps be more easily thwarted by mutations.

“For now the vaccines remain effective, but there is a trend toward less effectiveness,” said Dr. Céline Gounder, an infectious disease physician and epidemiologist at Bellevue Hospital in New York.

In India, a number of doctors point to anecdotal evidence that people who have been fully vaccinated are getting sick. Those doctors also say they are seeing children with serious symptoms, such as severe diarrhea, acidosis and falling blood pressure, even among otherwise healthy patients.

“This is very different from what we saw last year,” said Dr. Soonu Udani, head of critical care services at the SRCC Children’s Hospital in Mumbai.

Researchers say other factors could lead to more infections among young people, such as India’s schools, which had started reopening in recent months after the country’s first wave.

The variant in India is sometimes called “the double mutant,” though the name is a misnomer because it has many more mutations than two. It garnered the name because one of its three versions contains two genetic mutations found in other difficult-to-control variants of the coronavirus. One is present in the highly contagious variant that ripped through California earlier this year. The other is similar to one found in the variant first identified in South Africa and is believed to make the vaccines slightly less effective.

“There are variants that are more transmissible than what we all coped with a year ago,” Barrett said of the many variants circulating in India. “Things can change really quickly, so if a country doesn’t react quickly enough, things can go from bad to very bad very quickly.”

Scientists say that different variants seem to dominate specific parts of India. For instance, the B.1.617 variant has been detected in a large number of samples from the central state of Maharashtra.

By contrast, the B.1.1.7 variant is rising quickly in New Delhi, said Dr. Sujeet Singh, director of India’s National Centre for Disease Control. It was prevalent in half of samples evaluated at the end of March, up from 28% just two weeks before. The B.1.617 variant is also circulating in New Delhi, he added.

But ultimately, the data from India is too thin to parse the distribution of variants around the country. Despite the huge number of new infections, India is performing very little genomic sequencing.
In December, the government tapped a group of 10 laboratories and set an ambitious target to sequence 5% of samples across the country every month. But so far, less than 1% of samples collected has been sequenced. A report in The Wire, an Indian online publication, pointed to logistical challenges, bureaucratic red tape and the lack of funding as some of the reasons.

“They simply aren’t well-resourced enough, as sophisticated as their scientists and doctors might be,” Gounder said.

Apart from Britain, few other countries have been monitoring variants closely. The United States was also sequencing less than 1% of samples and ramped up its efforts only in recent weeks.

Officials in India are trying to track how many fully vaccinated people have fallen ill, a measure called the breakthrough infection rate. That could suggest how virulent any variant in India might be. They have focused on frontline medical workers, who are more likely to have received both doses of the AstraZeneca vaccine.

So far, data from the Indian Council of Medical Research up to April 21 shows an extremely low breakthrough infection rate, though perhaps not as low as that of the United States. The data shows 0.02% to 0.04% of vaccinated people falling ill. The rate in the United States, which relies on different vaccines, is 0.008%.

At Sir Ganga Ram hospital, the 37 doctors who became infected after immunization had received their first dose between late January to early February and then their second dose four to six weeks after that. The hospital employs about 500 doctors.

Shad, the cardiac surgeon, was reluctant to jump to conclusions about variants breaking through the immunizations. “I don’t think anyone has the serological data” to answer that, he said.

A broad lack of data plagues the scientific chase for variants and whether they are contributing to the severity of India’s crisis. Fast-moving mutations complicate the picture because it isn’t immediately clear how quickly they spread or how they respond to vaccines.

In India, the health care system wasn’t on alert for the impact of variants at home, even as they began to spread globally, said Dr. Thekkekara Jacob John, a senior virologist in the southern state of Tamil Nadu.

“We were not looking for variants at all,” he said. “In other words, we missed the boat.”