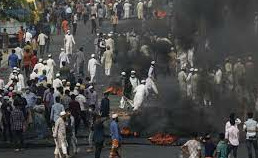 The pressure on Hefazat-e-Islam Bangladesh is likely to increase in the days to come as the intelligence agencies have found numerous connections of the leaders of the Islamist group with other anti-government entities, top government sources have said.

The government initiated tough legal action against Hefazat in the wake of widespread acts of violence and vandalism by the group last month. Several Hefazat leaders, including former joint general secretary Mamunul Haque, have since been arrested.

“We have found connections between Hefazat-e-islam and BNP, Jamaat, Harkatul Jihad [banned militant outfit Huji-B, recently renamed as Manhaj] and some foreign militant groups,” said a member of the Detective Branch (DB) of Police involved in the interrogation of the Hefazat leaders, wishing anonymity.

“Hefazat’s funding came from Dubai, Pakistan, Qatar, Saudi Arab, London and even from India. We are collecting details of their bank statements to find more connections,” he told media.

Addressing journalists on Wednesday, Home Minister Asaduzzaman Khan Kamal confirmed that the intelligence agencies were investigating into the funds received by Hefazat from abroad.

DB police sources said that they wished to seek further remand for several Hefazat leaders, including Mamunul and Junaid Al Habibi, to glean more information from them.

Police have made a list of around 500 phone numbers that contacted Hefazat in the lead up to the mayhem by the group on May 5, 2013, and ahead of Indian Prime Minister Narendra Modi’s visit to Dhaka in late March.

They have also learned that Junaid Al Habibi flew to London shortly after the 2013 incident and sent money back to Hefazat.

Junaid Babunagari, one of the chief advisers of Hefazat’s convening committee, might also face arrest in the two cases already filed against him, the sources added.

The decision came within hours after the highest policy-making body of the country’s Qawmi madrasas, Al-Hayatul Ulaya Lil Jamiatil Qawmia Bangladesh, slapped a ban on student and teacher politics across the country.

Later a five-member convening committee was formed with Babunagari as one of its three advisers.

According to a top police official, some Hefazat leaders have admitted during their remand that they intended to discredit the government through demonstrations ahead of Modi’s visit on March 26.

Regarding the matter, Home Minister Asaduzzaman Khan Kamal said: “The point is, if you look at it all at once, Hefazet was politically motivated. We have, so far, come to know through our interrogation that Hefazet wants a repeat of the incident at Shapla Chattar in 2013.”