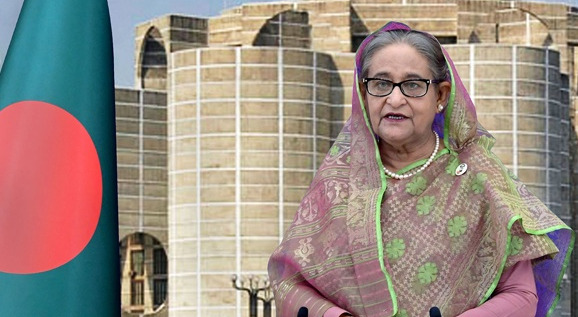 The prime minister mentioned that failure to tackle this hazard in time will result in a huge loss of human lives, animals, and plants

Prime Minister Sheikh Hasina on Thursday stressed on the importance of five actions to fight against antimicrobial resistance (AMR) as it is crucial for preventing future pandemics.

The prime minister put forward the actions at a high-level Interactive Dialogue on AMR through her pre-recorded statement played at the opening segment of the dialogue at the United Nations Headquarters in New York.

The actions include an integrated multisectoral action plan on AMR, including a collective action plan by the international community at both regional and global levels with a special focus on low- and middle-income countries; and good manufacturing, laboratory practices and surveillance framework.

The three other actions are equitable access to affordable and effective antibiotics, as required, through the transfer of technology and sharing of ownership; sustainable financing for AMR containment activities and finally global public awareness in combating AMR through political commitment and partnership among the member states.

“Addressing the challenges of AMR is crucial for preventing future pandemics. We need to implement the 2015 Global Action Plan on AMR, 2016 UN political declaration on AMR, and formulate AMR national action plans,” she said.

As co-chairs of the Global Leaders Group on AMR, the prime ministers of Bangladesh and Barbados stand ready to work with all relevant stakeholders in contributing to the fight against AMR, PM Hasina said.

She said the world is now witnessing the devastating pandemic of Covid-19.

“However, antimicrobial resistance may cause even more lethal pandemics in the future.”

The prime minister mentioned that failure to tackle this hazard in time will result in a huge loss of human lives, animals, and plants.

According to an estimate by the WHO, she said, 10 million people will die every year by 2050 from AMR, and economic losses will be trillions of dollars disrupting food security and progress towards achievement of the SDGs and universal health coverage.

Turning to Bangladesh, the Prime Minister said the government has developed a six-year (from 2017 to 2022) National Strategic Plan and National Action Plan on Antimicrobial Resistance Containment (ARC).

Besides, she said, the National Technical Committee on ARC and the Bangladesh AMR Response Alliance have been formed.

Sheikh Hasina said laboratory-based AMR surveillance for both human and animal health is being conducted regularly to ensure WHO categorization.

“Similarly, from 2019, we’ve been providing AMR surveillance data to WHO GLASS Platform,” she added.

President of the 75th session of the United Nations General Assembly Volkan Bozkir convened the high-level dialogue calling for accelerated action to tackle the growing threat of AMR.

AMR — referred to as a silent tsunami — has the potential to be the next global health crisis and has already affected the response to Covid-19.

AMR occurs when bacteria, viruses, fungi and parasites change over time. As a result of drug resistance, antibiotics and other antimicrobial medicines become ineffective and infections become increasingly difficult or impossible to treat-increasing the risk of disease spread, severe illness and death.

According to the UN website data, the Covid-19 pandemic has shown the ease with which infections can spread, threaten global health security and destabilize economies, lives and livelihoods. AMR is a rising pandemic and challenges the effective delivery of the Sustainable Development Goals (SDGs).