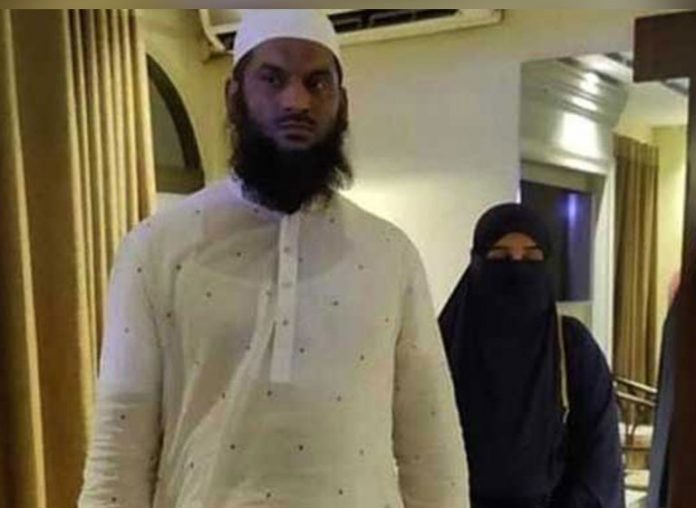 Mamunul will be shown arrested and interrogated in the case, says Narayanganj SP

Hefazat-e-Islam leader Mamunul Haque has been sued with charges of rape in a case filed with Sonargaon police station in Narayanganj.

The case was filed three days after the Detective Branch of police rescued Jharna from a house in Dhaka’s Mohammadpur area.

She was reportedly detained at the house, which belongs to Mamunul’s sister Dilruba, since she was found with Mamunul at a resort in Sonargaon on April 3.

Waliur Rahman, Jharna’s father, filed a general diary (GD) with Kalabagan police station in Dhaka on April 26, as he had been unable to locate his daughter since the news of the resort incident broke out.

Besides, Abdur Rahman, Jharna’s son with her former husband, also filed another GD with Paltan police station on April 11.

Since the resort incident, although the Hefazat leader claimed Jharna was his second wife, she did not mention herself as his wife in the case document.
What the case statement says

According to the case docket, Jharna met Mamunul in 2005 as he was a close friend of her former husband Maulana Shahidul Islam.

Before meeting Mamunul, the couple was leading a happy life.

Mamunul used to visit their house frequently, and tried various tricks to cause trouble in between Jharna and Shahidul.

Provoked by Mamunul’s evil counsel, the couple got divorced on August 10, 2018.

After the divorce, Mamunul allured her to come to Dhaka, and trusting him, Jharna did so.

“At one stage, he began a physical relationship with me, with the promise of marriage,” Jharna said in the statement.

In the last two years, Mamunul took her to different hotels and resorts in Dhaka and nearby areas to spend time together – all with the promise of marriage.

“When I talked about marriage, he wasted my time giving me assurances,” she said.

Mamunul took her to a Sonargaon resort on April 3 and raped her there again, she said.
Local people detained them at the resort, and Mamunul’s followers attacked the resort and took them away, according to the case document.

After the incident, Mamunul kept her confined illegally in the house of an acquaintance and did not allow her to contact her parents and children.

“Later, I tactfully informed my eldest son Abdur Rahman about my condition and asked him to take legal steps to rescue me.”

When the Detective Branch rescued Jharna on April 27, she came to know that her father had already filed a general diary with Kalabagan police station to rescue her.

“The police rescued and handed me over to my father.”

She faced threats from the followers of Mamunul and consulted with her family and relatives, and thus she got delayed in filing a complaint, the case statement added.
‘I want justice’

After filing the lawsuit, Jharna spoke with journalists and said Mamunul had been deceiving her for a long time.

“He [Mamunul Haque] has done injustice to me by taking advantage of me.”

She demanded justice for herself.

Narayanganj Superintendent of Police (SP) Zayedul Alam told the media that they were working to ensure justice for Jharna.

In the meantime, she underwent medical tests at Narayanganj General Hospital, he said.

“Mamunul Haque will be shown arrested and interrogated in the case. We will do everything for the sake of the investigation,” the SP added.
What happened in Sonargaon?

On April 3, people found and surrounded Mamunul, former joint secretary general of the radical Islamist platform Hefazat-e-Islam, staying with a woman whom he claimed to be his wife, at Royal Resort in Sonargaon.

Local administration and police officials went to the resort upon hearing about the incident.

Police said at the time Mamunul was not being detained or arrested, and that they were trying to find out what happened.

Later on, stick-wielding Hefazat supporters launched an attack on the resort. They vandalized it and snatched Mamunul away from police.
They also blocked the Dhaka-Chittagong highway, vandalized and torched vehicles, protesting what they said was harassment of the Islamist leader. At the same time, Hefazat activists attacked the local Awami League office and vandalized it.

On April 18, police raided Mohammadpur Jamia Rahmania Arabia Madrasa in Dhaka and arrested the Hefazat leader, who has been in the limelight for several months for mobilizing violent movements demanding removal of Bangabandhu’s sculpture and protesting the arrival of Indian Prime Minister Narendra Modi in March.

Multiple cases have been filed against Mamunul before the arrest.

On April 19, a Dhaka court placed him on seven-day remand in a case filed with Mohammadpur police station in 2020.

On April 26, he was put on seven-day remand afresh in two cases lodged over Hefazat’s mayhem in Dhaka in May 2013 and March 2021.

The cases were filed with Motijheel and Paltan police stations, respectively.