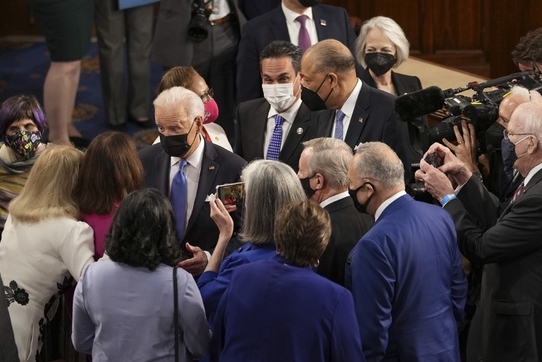 When Joe Biden served as vice president in the Obama administration, he was known to preface his recommendations to other officials with a self-deprecating disclaimer. He may not have attended Harvard or Yale, Biden would say as he popped into an office or a meeting, but he was still a foreign policy expert, and he knew how to work Capitol Hill.
Biden isn’t apologising anymore.

Now 100 days into his presidency, Biden is driving the biggest expansion of US government in decades, an effort to use $6 trillion in federal spending to address social and economic challenges at a scale not seen in a half-century. Aides say he has come into his own as a party leader in ways that his uneven political career did not always foretell, and that he is undeterred by matters that used to bother him, like having no Republican support for Democratic priorities.

For an establishment politician who cast his election campaign as a restoration of political norms, his record so far amounts to the kind of revolution that he said last year he would not pursue as president — but that, aides say, became necessary to respond to a crippling pandemic. In doing so, Biden is validating the desires of a party that feels fiercely emboldened to push a liberal agenda through a polarised Congress.

The result is something few people expected: His presidency is transforming what it means to be a Democrat, even among a conservative wing of his party that spent decades preaching the gospel of bipartisanship.

“We’ve been very happy with his agenda and we’re the moderates,” said Matt Bennett, a co-founder of Third Way, a Democratic think tank named after a governing style embraced by former President Bill Clinton that rejected liberal orthodoxy. “Some have said this is a liberal wish list. We would argue that he is defining what it is to be a 21st-century moderate Democrat.”

Biden trumpeted his expansive agenda again Wednesday night in his first address to Congress, casting his efforts to expand vaccinations and pour trillions of dollars into the economy as a way to unify a fractured nation.

“We’re vaccinating the nation; we’re creating hundreds of thousands of new jobs,” he said. “We’re delivering real results to people — they can see it and feel it in their own lives.”

Biden, 78, has pursued these sweeping changes without completely losing his instinct for finding the centre point of his party. As the Democratic consensus on issues has moved left over the years, he has kept pace — on abortion, gun control, same-sex marriage, the Iraq War and criminal justice — without going all the way to the furthest liberal stance. Now, he is leading a party that accelerated leftward during the Trump administration, and finding his own place on the Democratic spectrum — the one with the most likelihood of legacy-cementing success.

In private calls with Sen Bernie Sanders, whom he vanquished in the Democratic primaries, he collects ideas from the party’s liberal wing. With Sen Joe Manchin, the centrist West Virginia Democrat, he keeps tabs on his caucus and its slim congressional margins. And in conversations with Sen Mitch McConnell, the minority leader and a longtime negotiating partner, Biden appeals for bipartisan support, even as he warns that he will not wait for it indefinitely.

“Biden is a politician who stays inside of the moment,” said Rashad Robinson, president of racial justice organisation Colour of Change, which was sceptical of Biden during the primary but now praises his work. “He stays inside of where the cultural context has moved.”

To the consternation of some Republicans, Biden is approaching politics differently from recent Democratic presidents who believed that support from the opposing party would provide a bulwark for their policies and political standing. In the 1990s, Clinton espoused triangulation, a strategy that forced liberals to settle for moderate policies by cutting deals with Republicans. Former President Barack Obama spent months trying to win bipartisan buy-in for his policy proposals.

Both strategies were rooted in political fears that began in the Reagan era: Doing too much to assuage the party’s left flank could alienate voters in the middle who took a more sceptical view of government, leaving Democrats unable to build coalitions for reelection.
Biden and his administration have embraced a different philosophy, arguing that difficult times have made liberal ideas popular with independents and some Republican voters, even if GOP leaders continue to resist them.

The shift leftward, aides say, reflects a recognition by Biden that the problems facing the country require sweeping solutions, but also that both parties changed during the polarising years of the Trump administration. Gone is the Senate where Biden spent decades, legislating like former President Ronald Reagan, who liked to say he would call any negotiation where he could get 70% of what he wanted a win.

Other Republicans see a more dissembling president, one who has broken his promises to reach across the aisle. In a floor speech Wednesday afternoon, McConnell accused Biden of “false advertising” during his campaign, saying Americans “elected a president who preached moderation.”

He added: “Over a few short months the Biden officials seems to have given up on selling actual unity in favour of catnip for their liberal base.”

In his address, Biden said he was open to hearing Republican ideas on his infrastructure plans — but would not wait forever.

“I applaud a group of Republican senators who just put forward their proposal,” he said. “We welcome ideas. But the rest of the world isn’t waiting for us. Doing nothing is not an option.”

The decades Biden spent cultivating a moderate image, paired with the conciliatory tone he has adopted toward Republicans in public, has allowed him to push his agenda without facing charges of socialism — a label his opponents unsuccessfully tried to make stick during the presidential campaign.

Focus groups throughout the campaign found that voters felt they knew Biden, both for his family story and working class bona fides. Even now, voters rate Biden as more moderate than Obama at the same stage of his presidency, according to polling from NBC News. Biden is pursuing a more liberal agenda than Obama did, of course; but he is taking a lower-key approach and advancing relatively popular ideas, and he does not face the same smears and attacks as Obama did as the first Black president.

“It’s been very artful because it’s allowed him to create this weird equilibrium where people don’t see him as a partisan ramrod, which gives comfort to moderates,” said David Axelrod, a former top adviser to Obama. “On the other hand, he’s really moving forward on a lot of these initiatives.”

Aides and allies say the Jan. 6 attack on the Capitol also affected Biden’s thinking about what the country might accept politically. The soon-to-be president believed the violence alienated a slice of voters from Donald Trump’s Republican Party, leaving them more open to Biden’s agenda, particularly if he delivered tangible government benefits like stimulus checks and vaccines.

“It’s fair to say that Obama followed the Clinton model, and Biden is not, in some fundamental ways, because the world has changed so profoundly,” Bennett said. “Joe Biden is dealing with a seditious, anti-democratic set of lunatics. You can’t deal with people who voted to overturn the election. You simply cannot, even if you’re a moderate.”
Biden’s predecessor helped till the ground in other ways. As Trump focused his attention on waging baseless attacks against the election results last winter, coronavirus cases surged across the country, leaving Americans eager for more economic and public health assistance; Biden provided that with a $1.9 trillion stimulus bill just a few weeks into his presidency.

“Joe Biden is living in a honeymoon with a prenup signed by Donald Trump,” said Rahm Emanuel, who was Obama’s chief of staff.

Yet some longtime friends and allies also see a more personal evolution in Biden since he assumed the role of president.

His inner circle says he is exhibiting a level of confidence they have never seen before, combined with an awareness that he only has a short window to achieve his goals before next year’s midterm elections, which could cost Democrats their slim governing majority. While Biden has said his “expectation” is that he will run again, political allies privately admit that remains an open question given his age.

Biden’s administration has not given liberals everything they have wanted, pushing back on proposals to cancel student debt, adopt the entirety of the Green New Deal and completely eliminate the filibuster.

During negotiations with Sanders’ team last summer over a shared platform that would unify Democrats behind Biden’s general election candidacy, Biden aides made clear that they would not accept any recommendations that they did not believe he could support if elected. At one point, they agreed to decriminalize marijuana but rejected a plan to legalise it completely, saying Biden did not agree with that policy, according to a person involved in the talks.

But Biden did not treat the negotiations as simply optics, an encouraging sign to many progressives that Biden and his team were committed to pursuing more-liberal policies than they had realised.

Biden’s advisers said they were perplexed by the progressive zeal over the president’s economic agenda, noting that the American Jobs Plan is exactly what Biden promised he would do during his campaign. The view from inside the West Wing is that liberals and Republicans both made false assumptions about Biden and how he would govern.

Aides argue that Biden has not changed from the candidate who just months ago promised to find “between four and eight Republican senators” to support his policies. He is still the politician who would be more comfortable compromising on his proposals, getting less than what he wanted, but passing legislation with Republicans on board. He still describes McConnell as a friend, and thinks he might have come in with a better shot at getting his support than Obama.

Aides also say he believes that bipartisan support, in the long term, will be more important for the country than passing his $4 trillion infrastructure bills untouched, through reconciliation.

“In his heart, he probably still would love to forge bipartisan deals,” Axelrod said. “But he’s going to be judged at the end of the day not on style points but what he gets done, and he knows that.”
source: New York Times