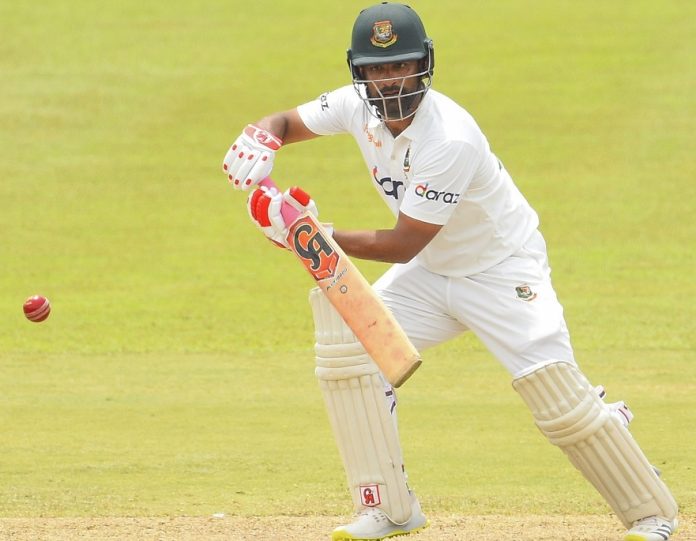 Mominul Haque and Liton Das followed him in quick succession after the break leaving the side on 224-6.

Bangladesh were all out for 251 in their first innings against Sri Lanka on third day of their second Test match at the Pallekelle International Cricket Stadium on Saturday.

Bangladesh were 242 runs behind of Sri Lanka’s first innings total of 493 and still 42 runs short from saving the follow on when they were all out but Sri Lanka did not forced follow and came to batfor their second innings instead.

The visitors lost yet another wicket at the verge of a session as Mushfiqur Rahim was dismissed for 40 at the stroke of tea while Mominul Haque and Liton Das followed him in quick succession after the break leaving the side on 224-6.

Mushfique and Mominul were steadying the ship as they added 63 runs off 111 balls before Mushfiq was adjudged leg before off debutant Praveen Jayawickrama following a review.

This was the third wicket for the 22-year-old left-arm spinner in the innings. Bangladesh were still trailing by 279 runs replying hosts’ 493-7. Things became worse as Mominul was adjudged leg before off Ramesh Mendis for 49 before Liton was dismissed for eight in the next over of Jayawickrama.

Earlier, Bangladesh opener Tamim Iqbal got dismissed on 92 and missed opportunity of scoring yet another century in the series. Tamim in the first Test had scored 90 in the first innings and was unbeaten on 74 in the second innings as the game saw a forced end by rain.

Bangladesh made a steady start following the early morning declaration of the hosts with a 98-run opening stand of Tamim and Saif Hassan but their rhythm was damaged as opener Saif and Najmul Hossain Shanto fell in two consecutive overs just before lunch.

Following lunch Tamim and Mominul made effort to recover the damage. The duo added 52 runs for the fourth wicket before Tamim was perished by Jayawickrama.

Opener Saif was the first to fall for Bangladesh, on 25, to the rookie Jayawickrama in the 26th over of the innings. In the next over, centurion from the last game Najmul got dismissed for a duck to off-spinner Ramesh Mendis, who is playing his second Test for the island nation.
Earlier on the day, Sri Lanka, who resumed on 469-6 from 155.5 overs, batted just 3.3 overs to add 24 runs and declare on 493-7 when Taskin Ahmed removed overnight batsman Ramesh Mendis for 33.

Taskin, who impressed with his pace and accuracy, finished with 4-127, his first ever four-wicket haul in Tests but his figure could be much better had his colleagues did not drop easy catches off his bowling.Niroshan Dickwella of Sri Lanka remained not out on 77 off just 72 balls when hosts’ skipper Dimuth Karunaratne declared the innings.