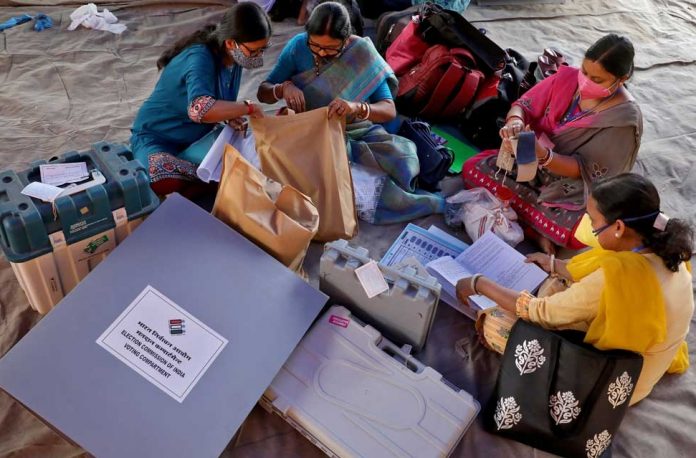 Trinamool Congress ahead in 202 seats while BJP leading in 77

The Election Commission’s early trends in the West Bengal Assembly polls on Sunday showed that the Trinamool Congress comfortably reached the halfway mark to form the government.

Counting of the votes in West Bengal and three other states – Assam, Kerala and Tamil Nadu – and the Union Territory of Puducherry began at 7 am local time. The majority mark in the 294-seat West Bengal Assembly is 148.

As of 12:45pm, the Election Commission’s data showed that the Mamata Banerjee-led party was ahead in 202 seats while the Bharatiya Janata Party was leading in 77.

Banerjee, who contested from Nandigram against her former aide and TMC turncoat Suvendu Adhikari, was trailing with a small margin of 3,775 votes. In 2016, Adhikari had won with a margin of 81,230 votes.
During the fourth phase of the elections on April 10, four people were killed when central security force personnel opened fire at a polling booth in Sitalkuchi in Cooch Behar district, after some locals allegedly clashed with them. Another person was shot dead that day outside a polling booth in the same district by unidentified men. The BJP and the TMC had accused each other of being responsible for the incident.

Due to the intensifying Covid-19 situation in the country, the Election Commission of India has prohibited the entry of polling agents into the counting centres without a negative Covid-19 test. Entry would also be allowed if the agents were fully vaccinated. The poll panel has also taken other measures to check the spread of the infection.

Overview of poll-bound states and Puducherry

Elections in West Bengal took place in eight phases, beginning on March 27. The last phase was held on April 29.

There are 294 seats and the majority mark is 148. There are three major fronts in the polls – one led by the Trinamool Congress, another by the Bharatiya Janata Party and the third comprising the Congress, Left parties and other smaller parties.

Multiple exit polls have predicted that the Trinamool Congress is likely to return to power in the state.

The elections to the 234 seats in the Tamil Nadu Assembly took place in a single phase on April 6. The majority mark is 118.

While the Congress is in alliance with the DMK, the Bharatiya Janata Party has joined hands with the AIADMK for the polls.

Exit polls predict that MK Stalin-led DMK will wrest control in the state.

Kerala voted in a single phase on April 6 to choose legislators for 140 seats of the state legislative Assembly. The majority mark is 71.

The National Democratic Alliance is posing as the third front and is led by the Bharatiya Janata Party, which wants to make inroads in the state.

Chief Minister Pinarayi Vijayan is expected to retain power for a second successive term, according to many exit polls.

Elections to the 126-member Assam Assembly took place in three phases. The majority mark is 64.

The Bharatiya Janata Party, the ruling party in the state, is contesting the polls in alliance with the Asom Gana Parishad and the United People’s Party Liberal.

The Opposition coalition comprises the Congress, the All India United Democratic Front and Left parties.

Multiple exit polls have projected a win for the BJP.

The Union Territory went to polls in a single phase on April 6.

Puducherry has 33 seats but three are nominated by the lieutenant governor. The majority mark is 17.

The Secular Democratic Alliance is led by the Congress and comprises Dravida Munnetra Kazhagam, Viduthalai Chiruthaigal Katchi and the Communist Party of India.

The National Democratic Alliance is led by the All Indian NR Congress and comprises the Bharatiya Janata Party and the All India Anna Dravida Munnetra Kazhagam.