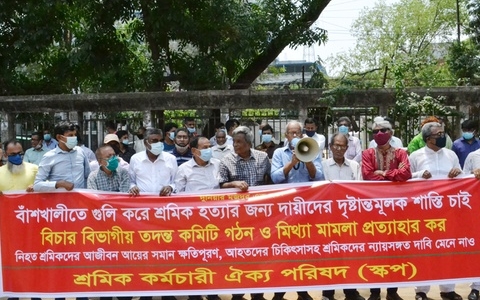 The High Court has ordered S Alam Group to pay Tk 500,000 to each of the families of the six people killed in a clash between police and workers at a power plant under construction in Chattogram’s Banshkhali.
The ordered was issued by Justice M Enayetur Rahim and Justice Sardar Md Rashed Jahangir on Tuesday, following a hearing of two petitions filed by Ain o Salish Kendra and the Bangladesh Environmental Lawyers Association and four other rights organisations.

During the hearing, lawyer Md Arshadur Rouf, who represented S Alam Group at the meeting, said that the company was paying Tk 300,000 in compensation to the family of each victim.
The senior judge on the bench, M Enayetur Rahim, then ordered the company to pay an additional Tk 200,000 to each family.

Violence broke out between police and protesting workers at the 132 MW power plant under construction by S Alam Group in Banshkhali on Apr 17. Four people were shot and killed at the scene and two later died in hospital.

Witnesses and workers say the clash broke out during a protest calling for back pay and reduced working hours during Ramadan.