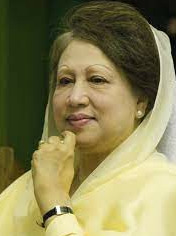 Family seeks to take her abroad for treatment

A 10-member medical board, formed for the treatment of BNP Chairperson Khaleda Zia, is set to review the her health condition on Tuesday.

The former prime minister, who has tested positive for Covid-19, is now undergoing treatment at the Evercare Hospital in Dhaka.

She was moved to the Coronary Care Unit (CCU) on Monday after complaining breathing issues.

Khaleda Zia’s personal physician Dr Abdullah Al Mamun told media that after reviewing her health condition, the medical board will give an opinion on whether she needs treatment abroad.

Her condition is stable now but can deteriorate at any time, he said.

“Because, she has been suffering from various health problems for a long time before being infected with Covid-19.”

He said: “Considering his physical condition, we agree that she should be taken abroad for advanced treatment at this time. Since her family is in London, she can get treatment there.”

Family sources said preparations are underway to take him to London for better treatment.
The family, meanwhile, has sought permission from the government to allow her to go abroad for advanced treatment.

When asked, BNP leaders said the family will decide in which country Khaleda Zia should be taken to for treatment as they are talking to the government about the issue.

According to physicians, after reviewing her condition, the medical board will decide if she will be transferred to the cabin from the CCU.

“As she became more uncomfortable during the day, she was moved to the CCU.”

Her shortness of breath was caused by excess fluid accumulating in her lungs, according to sources.

Khaleda Zia was admitted to Evercare Hospital on April 27 for a thorough health check-up.

On April 28, the 10-member medical board, headed by Prof Shahabuddin Talukder, was formed for the treatment of Khaleda at the hospital.

She tested positive for Covid-19 on April 10 when eight people of her Gulshan residence were found to be infected with the virus.

She underwent a second Covid-19 test on April 24, and tested positive again. Her blood report and CT scan results were normal.

Amid the coronavirus outbreak, the government freed Khaleda from jail for six months through an executive order suspending her sentences in a corruption case on March 25 last year.

She was released from the prison cell of Bangabandhu Sheikh Mujib Medical University (BSMMU) the same day. She has been staying at her Gulshan house since then.

On August 27 last year, the government extended her release for six more months and it was extended again for six months on March 15 this year.

On February 8, 2018, Khaleda was sent to the Old Dhaka Central Jail after a lower court sentenced her to five years’ imprisonment in Zia Orphanage Trust corruption case. The High Court later doubled her jail term.

Khaleda was found guilty in another corruption case the same year. Her party claims both the cases are politically motivated.