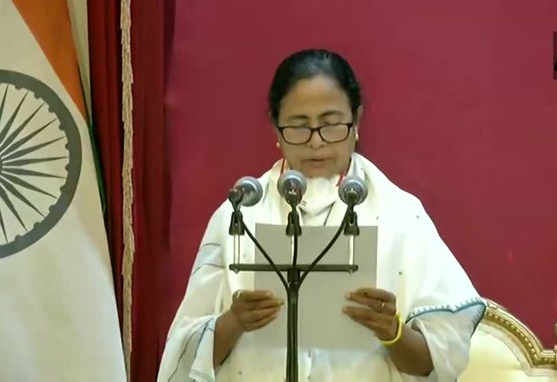 Trinamool Congress chief Mamata Banerjee on Wednesday was sworn in as the chief minister of West Bengal for the third consecutive term.

The oath of office was administered by Governor Jagdeep Dhankhar, ANI reported.

The oath-taking ceremony was a low-key profile in view of the alarming rise in coronavirus cases.

The Trinamool Congress secured a landslide victory in the state elections on Sunday, winning 213 constituencies – way beyond the majority mark of 148 – in the 294-seat Assembly.
While Banerjee won the state polls, she lost the Nandigram seat, where she was pitted against her former aide and Bharatiya Janata Party leader Suvendu Adhikari.

The incumbent chief minister alleged “looting and cheating” in vote counting and said that she will move the court.

The TMC also asked the Election Commission to conduct recounting but the request was turned down.
Initial reports on Sunday had claimed that Banerjee had won the seat though the counting of votes was under progress. Later, the poll panel announced that Adhikari beat Banerjee by 1,956 votes.

Meanwhile, there are reports of post-poll violence emerging from the state.

On Tuesday, Prime Minister Narendra Modi spoke to Dhankhar over the reported violence and expressed anguish.

Opposition parties have accused the Trinamool Congress of killing their supporters in various parts of the state since the election results were declared on May 2.

The ruling party has also claimed its members were killed. However, there has been no official confirmation yet by the state police.
On Wednesday, the governor again raised his concerns on Twitter.

“Such senseless violence shames democracy. Such collapse of law and order will neither be overlooked nor countenanced.”