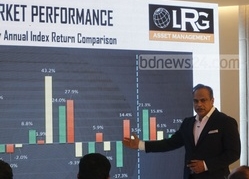 LR Global had gone through a long episode of “adverse conditions” due to a conspiracy by some former commissioners at Bangladesh Securities and Exchange Commission.
So says CEO Reaz Islam.

The conspiracy to “damage” LR Global’s performance in Bangladesh had a “huge impact” on the local market, Islam said at a news conference in Dhaka on Saturday.

“They conspired against the most successful and professional company in the market for their own interests, obstructing the flow of foreign investments into the capital market.”

Islam shared his experiences while narrating the condition of the market and successes achieved by LR Global, one of the top fund managers in Bangladesh.

“One or two BSEC commissioners had made a hell of my life with accusations, 95 to 99 percent of which were false,” Islam said, describing an episode in the history of the company as “painful experiences” that started in 2015.

After making a foray into the market in 2010, LR Global made “progress” but the former BSEC officials’ activities made the company’s work “difficult and painful”, he said.

“Foreign investors lost interest in Bangladesh’s market due to this behaviour towards one of the leading fund managers.”

M Khairul Hossain, a professor of finance at Dhaka University, presided over the BSEC as its chairman in the period Islam referred to, without naming him. Hossain returned to the university after the end of his tenure in May 2020.