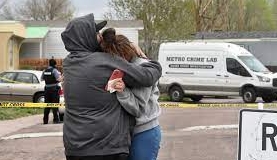 A birthday party in the US city of Colorado Springs has turned to a bloodbath after a man shot dead six people before killing himself.

“The suspect, a friend of one of the female victims, drove to the residence, walked inside and began shooting people at the party before taking his own life,” said the statement released by the Colorado Springs Police Department.

There were children inside the trailer to celebrate when the shooting occurred, the statement added.

The fatal shooting happened within the Canterbury Manufactured Home Community, a mobile home park of some 470 trailers and largely Latino residents on the southeast side of town, near the Colorado Springs airport, about 70 miles (110 km) south of Denver.

“Somebody came in and shot everybody,” said Freddie Marquez, who was at the party but left sooner, relating what he had been told on the phone by a survivor.A motive has yet to be determined.

The fatal attack came hours after another deadly shooting, which left four Americans, including a gunman, dead in Baltimore, Maryland.

The State of Colorado saw another mass shooting this year, in which a 21-year-old man killed 10 people in a March 22 shooting spree at a supermarket about 30 miles (50 km) northwest of Denver.

Sunday’s massacre was the latest in a resurgence of mass shootings in the United States after such occurrences seemed to recede during the height of coronavirus pandemic restrictions.

The recent shootings have revived the gun control debate, with Democratic President Joe Biden calling them a “national embarrassment” and calling for new legislation from Congress.

Biden faces fierce opposition from gun rights advocates including Republicans and some Democrats who cite the US Constitution’s protection of gun ownership rights.