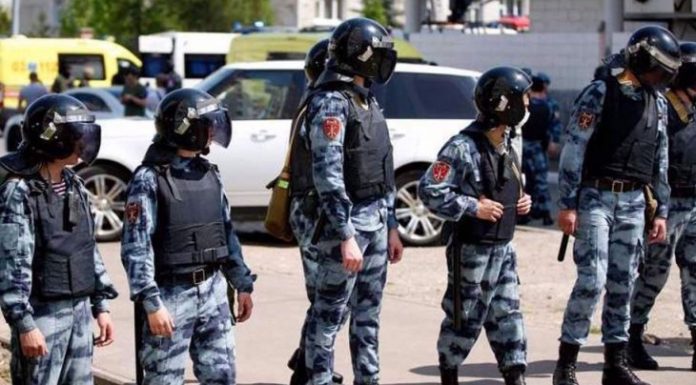 Russian President Vladimir Putin has ordered a review of gun control legislation after at least 11 people were killed in a shooting at a high school in the central city of Kazan.

“The president gave an order to urgently work out a new provision concerning the types of weapons that can be in civilian hands, taking into account the weapon” used in the attack, Kremlin Spokesman Dmitry Peskov told reporters on Tuesday.

Earlier on Tuesday, two gunmen opened fire at School No. 175 in Kazan.

“According to the updated information, 11 people were killed as a result of the shooting,” Sputnik cited a spokesman for the emergency services as saying.

“Two of the children who died in the school shooting plunged to death as they jumped out of a third-floor window,” he added.

According to Sputnik, there were also reports of an explosion that hit the school during the attack.

Preliminary reports said police detained a 17-year-old teenager, who is suspected of being behind the shooting.

Police later said that a second shooter, identified as a 19-year-old person who had an officially registered gun, had been neutralized.

Some news agencies reported that a second gunman suspected of carrying out the shooting had been killed.

“According to preliminary information, the second attacker in the school in Kazan who remained in the building was killed,” the TASS state news agency reported, citing a law enforcement source.

School shootings are rare in Russia. One of the last major shootings of its kind occurred in 2018 when a student killed 19 people at a college in the Black Sea peninsula of Crimea before taking his own life.