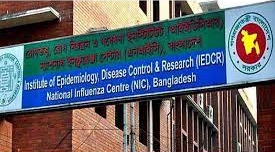 One of the India returnees, who was suffering from cancer, has died

The Indian variant of the coronavirus has been detected in six Bangladeshis, who have returned from India, says the Institute of Epidemiology Disease Control and Research (IEDCR).

One of them has died, according to IEDCR. The man was suffering from cancer and other complications.

All of them entered Bangladesh in late April and they were kept in isolation in different hospitals.

The IEDCR said that samples of 26 India returnees were tested in April and six people were found to carry the B.1.617.2 variant, known as the Indian variant.

All of the patients infected with the variant visited Chennai, Bangalore, Haryana and West Bengal in India for treatment between April 1 and April 25.

Three of the six are members of the same family and they are aged between seven and 75, according to the government’s disease control agency.
The World Health Organization has declared the Indian variant as a “global concern”, which has been so far found in 44 countries.

Apart from the India variant, Bangladesh has so far detected the UK, South Africa and Nigeria variants of the coronavirus.

The first case of the Indian variant was identified on May 8, according to the health department.

Amid a surge in Covid-19 infections in India, Bangladesh closed its borders with India for passengers since April 26.

However, stranded citizens are being allowed to enter with a negative Covid-19 report. A two-week institutional quarantine has been mandatory for returnees.