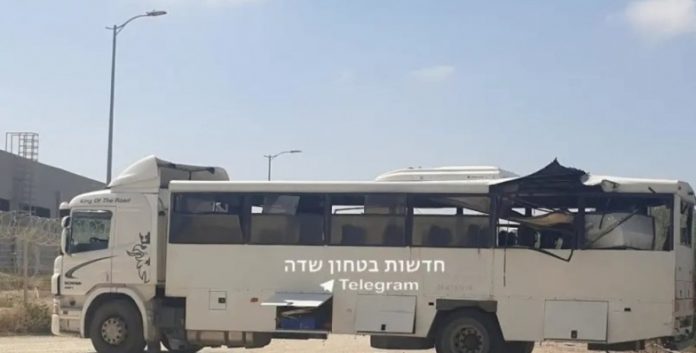 Palestinian resistance forces have fired an anti-tank missile at an Israeli military bus near the border with the Gaza Strip, as the Tel Aviv regime continues its bloody military onslaught on the Palestinian coastal enclave amid foreign diplomats’ push for a ceasefire between the two sides.

According to reports, fighters with the Ezzedine al-Qassam Brigades, the military wing of Hamas resistance movement, launched the projectile at the bus near an Israeli army camp in Zikim kibbutz, located south of Ashkelon, shortly after 10 a.m. local time (0700 GMT) on Thursday.

The Israeli military confirmed the attack, but claimed that the bus had been empty when it was hit.

After the attack, the illegal Zionist settlers within four kilometers of the Gaza border were ordered to stay in their homes near shelters and to actually stay in shelters until further notice.

Meanwhile, Fawzi Barhoum, a spokesman for Hamas, has stressed the need for the expulsion of Israeli regime envoys from Arab and Muslim states, and immediate cessation of all aspects of normalization of ties with the illegal Zionist entity.

“Normalization of relations [with Israel] is the greatest threat to al-Quds, al-Aqsa Mosque, the Palestinian people and the region. In fact, it’s time to force out Israeli envoys from Arab and Muslim countries, and to put an end to all forms of normalization of relations,” he told the Arabic service of Iran’s Fars news agency on Thursday.

Asked about short-term and long-term goals of Palestinian resistance groups, especially Hamas, in the face of the Israeli regime, Barhoum highlighted that his group aims to attain strategic goals for Palestinians, which will defend the entire nation, their lands and sanctities against Israeli aggression and sabotage.

The Hamas spokesman then drew distinction between the latest round of fighting with the Israeli military and the previous ones, stating that the experience and capabilities of Palestinian resistance forces boost up in every stage of confrontation with the enemy.

“We have united politically and militarily in this battle. We have introduced new munitions that the enemy is deeply shocked to see. We need all aspects of military, political and media support, and we thank all those who stand by us,” Barhoum concluded.

Meanwhile, the Zionist regime has prevented foreign journalists from entering the Gaza Strip since the beginning of its aerial bombardment campaign against the densely populated region.

The media bureau of the Palestinian Authority said in a statement on Thursday that Israeli authorities, despite having agreed on Tuesday to allow journalists into the Strip, are still not letting them in and are flagrantly preventing members of the press from covering developments as they happen.

The statement highlighted that the ban is due to the Israeli regime’s fear of a major scandal in the light of its crimes against defenseless Palestinian civilians, and went on to criticize international media outlets for their silence.

“International news outlets must not remain silent in the wake of the occupying regime’s violations of freedom of opinion and information. They must openly declare their rejection of Israeli regime’s recent decision, and condemn the occupiers’ policy of targeting journalists and members of the press,” it read.

Additionally, the Popular Front for the Liberation of Palestine (PFLP) has called upon Palestinian people as well as Arab nations to boycott Saudi-owned Al Arabiya television news network, stating that the Dubai-based channel is promoting Israeli propaganda that distorts truth.

The movement said in a statement that Al Arabiya should not be allowed to operate within occupied Palestinian territories as “it is sowing the seeds of sedition and broadcasting controversial programs.”

The PFLP noted that the network’s programs are aimed at helping the Tel Aviv regime, and it has been spreading lies and propagating viewpoints hostile to Palestinians and the resistance front ever since it was launched back in March 2003.

The statement underscored that Al Arabiya is promoting the Israeli propaganda that distorts truth, and labels the just struggle of the Palestinian nation as terrorism.

The PFLP went on to criticize that the Saudi-owned news channel is also trying to portray Israel as a victim, and is telling outrageous lies about the immigration of resistance commanders and their families from the Gaza Strip to Egypt.