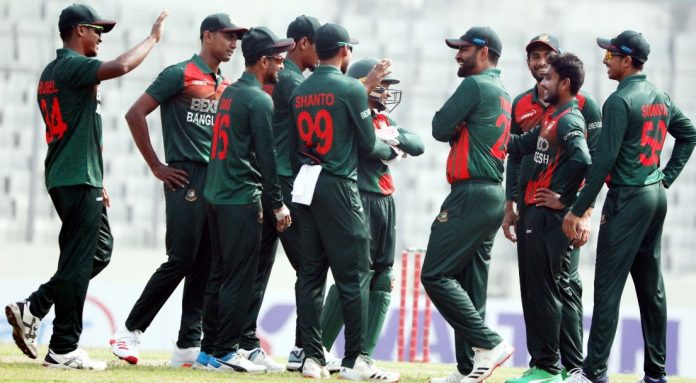 Bangladesh Cricket Board Thursday declared a 19-member squad, including four stand-bys, for the first two matches of the three-ODI series against visitors Sri Lanka.

All-rounder Shakib al Hasan returned to the fold having missed out on the away series in New Zealand in March this year.

The 34-year old was on paternity leave for the entire duration of the tour.

Right-arm pacers Rubel Hossain and Hasan Mahmud, who were part of the New Zealand series, will sit out the home series against the Lankans as they are recovering from different injuries.

Top-order batsman Nazmul Hossain Shanto and left-arm spinner Nasum Ahmed, who were part of the ODI squad in New Zealand, have been dropped.

Leg-spinner Aminul Islam Biplob was not part of the preliminary squad for the series, but has been named as stand-by for the first two ODIs.
“We had a good home series against the West Indies (in January this year). We had won the series 3-0. To maintain that consistency, we did not make heavy changes in the squad. I hope we will perform well against Sri Lanka,” said chief of the national selection panel Minhajul Abedin to the media Thursday.

“The squad is of 15 members along with four stand-bys. Mohammad Naim, Taijul Islam, Shahidul Islam and Biplob are there as stand-bys. Due to the Covid-19 situation, we have to keep players as stand-by. They will remain with the team in the hotel,” the former Bangladesh captain explained.

Chief selector Minhajul is optimistic of a good result, given that the series is at home and that Bangladesh are able to play its best players.

“We are always better at home and hope this series will be the same. We couldn’t perform well in New Zealand but the players are confident at home. It is always best for the team when Shakib or other best players are available to play. They played a practice game. We can expect of a good result if the players can remain confident,” said Minhajul.

Discussions were abound of the possibilities for top-order batsman Imrul Kayes to make yet another return to the national dressing room.

Imrul was made part of the preliminary squad referred by ODI captain Tamim Iqbal but the left-handed batsman could not make it into the squad for the first two matches.
Imrul since his international debut in 2008 has played 78 ODIs for Bangladesh.

Imrul in the game scored a 32-ball 33 before losing his wicket to off-spinner Mahmudullah.

The visiting side will play an intra-squad 50-over practice game at BKSP Ground 3 Friday.

Bangladesh will take on Sri Lanka in the first ODI Sunday at Sher-e-Bangla National Cricket Stadium in Mirpur.

The second and third game of the series will be played on May 25 and 28 respectively at the same venue.