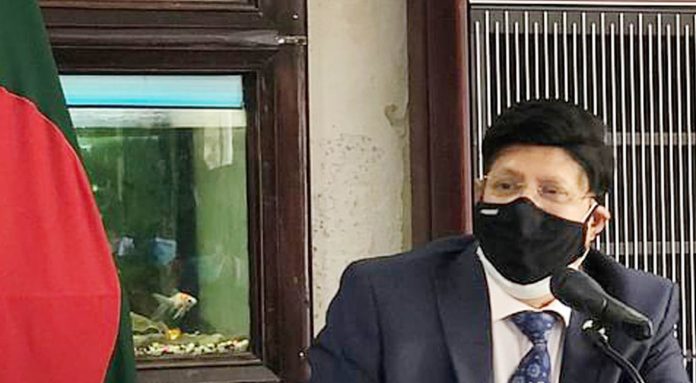 The foreign minister lauded media for reports on graft, saying ‘the government has nothing to hide’

Foreign Minister AK Abdul Momen on Thursday said it was very regrettable what happened to journalist Rozina Islam and there is noting for the government to hide.

He said they will have to face the international community for the behaviour of a few people.

“It’s very regrettable. The government of Sheikh Hasina is media-friendly. We’ve nothing to hide. I know, as the Foreign Ministry, we will have to face it. Many will raise questions. We don’t want such incidents,” Momen said, adding that “You [the questioner] may be right” that a handful of people tarnish the government’s image.

The foreign minister made the remarks while replying to a query on the arrest of the senior correspondent of daily Prothom Alo, after his meeting with South Korean Ambassador to Bangladesh Lee Jang-keun at the state guesthouse Padma in Dhaka.

Momen appreciated the role of the media in unearthing many stories, such as the RNPP pillow scandal and Regent Shahed issues.

Momen referred to what ruling Awami League Joint General Secretary Mahbubul Alam Hanif said on Wednesday and appreciated his remarks.
Hanif said the incident that took place at the secretariat with journalist Rozina Islam was undesirable and that the country would have benefited if strict action had been taken against the corrupt instead of filing cases against journalists.

Dr Momen said this should be managed by the Health Ministry. “We can say it’s a regrettable matter for our government.”

The foreign minister said since the Islam matter is now in court, he cannot talk about it in detail. “The only thing is, this is regrettable. The incident what happened is very regrettable. We expect it will not repeat again.”

Referring to what his other colleagues said, Dr Momen said Islam will get justice. “It’s unexpected.”

Islam is accused under sections 3 and 5 of the Official Secrets Act and sections 379 and 411 of the Penal Code, for allegedly attempting to “collect sensitive government documents and taking photos of them” at the Health Ministry.

On Tuesday18, a magistrate court turned down the police department’s request for a five-day remand and instead sent her to jail until her bail hearing scheduled for today.

Islam was confined to a room for nearly six hours as she went to the Health Ministry on May Monday when she fell ill and fainted. She was then taken to Shahbagh police station.

On Thursday, the Human Rights Watch said Bangladesh authorities should drop all the “oppressive charges” against renowned journalist Islam.

Islam’s colleagues believe she was detained over her reporting on corruption and mismanagement in the public health sector, including the government’s response to the Covid-19 pandemic, said the HRW.