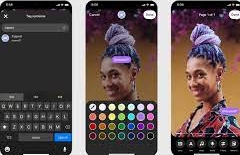 Pinterest, the social network that decided it doesn’t want to be classified as a social network anymore, given its evolving focus on eCommerce, has now also decided that it’s not going to call its Stories clone ‘Stories’ any longer.

Instead, today Pinterest is introducing ‘Idea Pins’. Which are the Story Pins that it’s been testing for the last seven months, but with a more Pinterest-like framing.
“Idea Pins are an evolution of Story Pins, with a fresh name to better match the uniqueness of a product that empowers creators to share long-lasting ideas and not ephemeral stories. Starting today, creators will have a suite of new publishing tools including, video-first features, fresh editing tools and updates to make creating Idea Pins easier and more creative.”

As you can see in the above screenshots, the Idea Pin format look very similar to the Stories options you’ll find in other apps, and are accessible via profile bubbles at the top of user feeds highlighting Idea Pins from users that you follow and those that Pinterest thinks you may like.
Also like Stories, Idea Pins are focused on sequences of short video clips that users can tap through. Each individual clip can be up to 60 seconds in length, while you can add up to 20 frames to each Idea series.

In addition to this, Pinterest is also adding new creative tools to edit your clips, including stickers, voiceover and music options. Pinterest has also added a “ghost mode” tool which enables creators to overlay the previous frame on the composer, helping to guide your video transitions.
Idea Pins also come with “detail pages” where creators can add additional annotations or explainers – like recipe details or product info, for example – while in variance to other Stories tools, Idea Pins also remain on user profiles, as opposed to disappearing after 24 hours.

In terms of discovery, creators can add topic tags, while you can also tag other Pinterest creators by using their @name
As noted, Pinterest will also be looking to help boost Idea Pin exposure by highlighting new creators to users who’ve shown an interest in similar concepts (based on tags and related follows).

Users will also be able to export Idea Pins, which will then be shareable on other platforms, with Pinterest branding.

Pinterest is also working on product tags, which are not available as yet, while it’s also launching new analytics tools to provide users with insights into their Idea Pin performance.
Naming conventions aside, it’s an interesting addition, which could provide new opportunities for exposure on the platform.

That’ll likely be especially true in the early going, as Pinterest looks to promote the option. Indeed, in the past, Pinterest has weighted its algorithm to boost exposure and reach for certain types of posts.

Given this, it’s probably worth experimenting with the feature, and checking in to see how others are utilizing the option. Monitoring other brands in your niche could help to inspire your own approach, or awaken you to new ideas that you hadn’t previously considered.

But essentially it’s Stories on Pinterest, with a more business/product specific focus. Which could be interesting even beyond the platform itself, highlighting additional ways to utilize the Stories format.

There are some interesting possibilities, definitely worth a look.

Idea Pins are now available to all users with a business account in the US, UK, Australia, Canada, France, Germany, Austria and Switzerland.
socialmediatoday