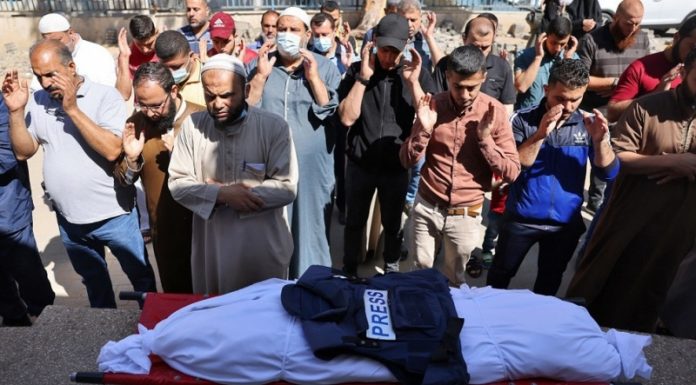 The head of Gaza’s Government Media Office says Israeli regime warplanes have targeted a total of 33 media offices in the blockaded Palestinian enclave as the occupying entity tries to eliminate eyewitness to its atrocities.

“The offices of 33 media outlets have been targeted by the Zionist regime in Gaza,” he said. “The killing of reporters has been a permanent policy of the occupying regime, which is trying to eliminate eyewitnesses and prevent the media from reporting its crimes.”

Maroof also called on the international community to take two urgent steps as Tel Aviv continues its bloody aggression on Gaza in defiance of worldwide condemnations: first annul Israeli regime’s membership in all international organizations, bodies and unions, and then form an international fact-finding committee to investigate the regime’s crimes against the media in Gaza.

On Sunday, Reporters Without Borders (RSF), an international NGO with the stated aim of safeguarding the right to freedom of information, denounced Israel’s bombing of media offices as “a war crime.”

He also urged International Court of Justice (ICC) chief prosecutor Fatou Bensouda to “include Israeli airstrikes on … media outlets in the Gaza Strip in her investigation.”

Elsewhere in his interview, Maroof appreciating the RSF’s call for an ICC probe into the Israeli onslaught on Gaza, stressing that such an action needs support and that Gaza’s Government Media Office will do its best to help RFS succeed in its push.

Since May 10, Israeli warplanes have been targeting residential buildings in Gaza, martyring more than 220 Palestinians, including 38 women and 65 children, and injuring 1,620 others.

Gaza-based resistance factions have been firing rockets into the occupied territories in response to the Israeli regime bloodshed. Reports indicate that some 4,000 rockets have been launched from Gaza since the outbreak of the conflict.