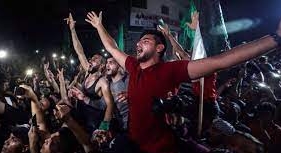 Palestinians in al-Quds, the West Bank and the Gaza Strip celebrated victory against the illegal Zionist entity, as a ceasefire unilaterally declared by Tel Aviv and accepted by Palestinian resistance groups went into effect early Friday.

In Gaza, which had been under heavy Israeli regime bombardment for 11 days, people came out onto the streets and chanted Allahu Akbar, while in al-Quds and West Bank towns, people set off fireworks.

Mosques in Gaza broadcast celebratory chants through their loudspeakers to celebrate the end to the Israeli acts of aggression.

The Zionist regime on Thursday declared a unilateral ceasefire starting at 2 a.m. on Friday, and the Palestinian resistance groups in Gaza accepted it.

Senior Hamas official Osama Hamdan said the resistance groups have obtained guarantees from Egyptian mediators that the Israeli regime attacks on Gaza and the Sheikh Jarrah neighborhood in al-Quds and al-Aqsa Mosque – the issues that triggered the fighting – would stop.

The Zionist entity began the aerial bombardment of the Gaza Strip on May 10, after weeks of violence against Palestinians at the al-Aqsa Mosque compound, where Israeli regime forces and illegal Zionist settlers attacked Palestinian worshipers, and in Sheikh Jarrah neighborhood, where the regime tried to force Palestinians out of their homes to build more illegal settlements.

The Israeli regime martyred at least 232 Palestinians, including 65 children and 39 women, through its aerial bombardment of Gaza. Palestinian resistance groups responded with thousands of significantly improved rockets, which caught Israel off guard.

Political analyst Khalil Shaheen said the Palestinian struggle against the Zionist regime has been bolstered as a result of their resistance against the regime’s crimes.

Speaking with the Middle East Eye, Shaheen said the struggle against the occupation has been taking a new turn since 2014.

After the announcement of the ceasefire, a senior Hamas figure said in a speech to thousands of people celebrating in Gaza that the ceasefire was a victory against the Israeli regime.

“This is the euphoria of victory,” said Khalil al-Hayya, the second most senior member of the Hamas political bureau in the Gaza Strip.

Another Hamas official told Lebanon’s al-Mayadeen television network that the resistance has received assurances regarding Israeli policy toward the Haram al-Sharif in the al-Aqsa Mosque compound, as well as Sheikh Jarrah.

“The resistance has forged a new equation and a new victory,” Osama Hamdan said.

Another Hamas official told Reuters that Israeli regime must compensate for the damage caused by its bombardment of Gaza and end its violations in al-Quds.

“It is true the battle ends today but [Benjamin] Netanyahu and the whole world should know that our hands are on the trigger and we will continue to grow the capabilities of this resistance,” said Ezzat El-Reshiq, a member of the Hamas political bureau.

He said the Palestinians’ demands also include protecting al-Aqsa Mosque and ending the displacement of Palestinians in the Sheikh Jarrah neighborhood, warning that the resistance groups have their “hands on the trigger.”