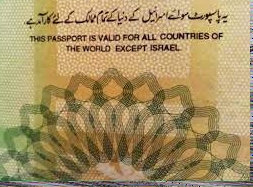 The Ministry of Foreign Affairs has made it clear that the holders of Bangladeshi passport are still banned from travelling to Israel.

The country’s position on Israel remains unchanged, the ministry said, reiterating Bangladesh’s support for a two-state solution to the conflict between Israel and Palestine.

The confusion appears to have emanated from the new booklets of E-passports, which do not contain the phrase “all countries excepting Israel,” the press release added.
The phrase has been removed to maintain international e-passport standards and does not imply any change to Bangladesh’s foreign policy towards the Middle East, it further said.

“The ban on travel of Bangladeshi passport holders to Israel remains unchanged. The Government of Bangladesh has not deviated from its position on Israel and remains firm in its longstanding position in this regard,” the release said.

The Bangladesh government has condemned the recent atrocities inflicted upon civilians by the occupation forces of Israel at the al-Aqsa mosque compound and in Gaza, it added.
“Bangladesh reiterates its principled position concerning the two-state solution of the Palestine-Israel conflict in light of the UN resolutions recognizing pre-1967 borders and East Jerusalem as the capital of the State of Palestine,” the press release said.

The decision to change the declaration was taken more than a year ago, and it is now being implemented, according to Department of Immigration and Passports Director General Mohammad Ayub Chowdhury.

“Passports only carry important information pertaining to the holder. That applies to immigration in all countries of the world. Nothing is more important than that,” he said.